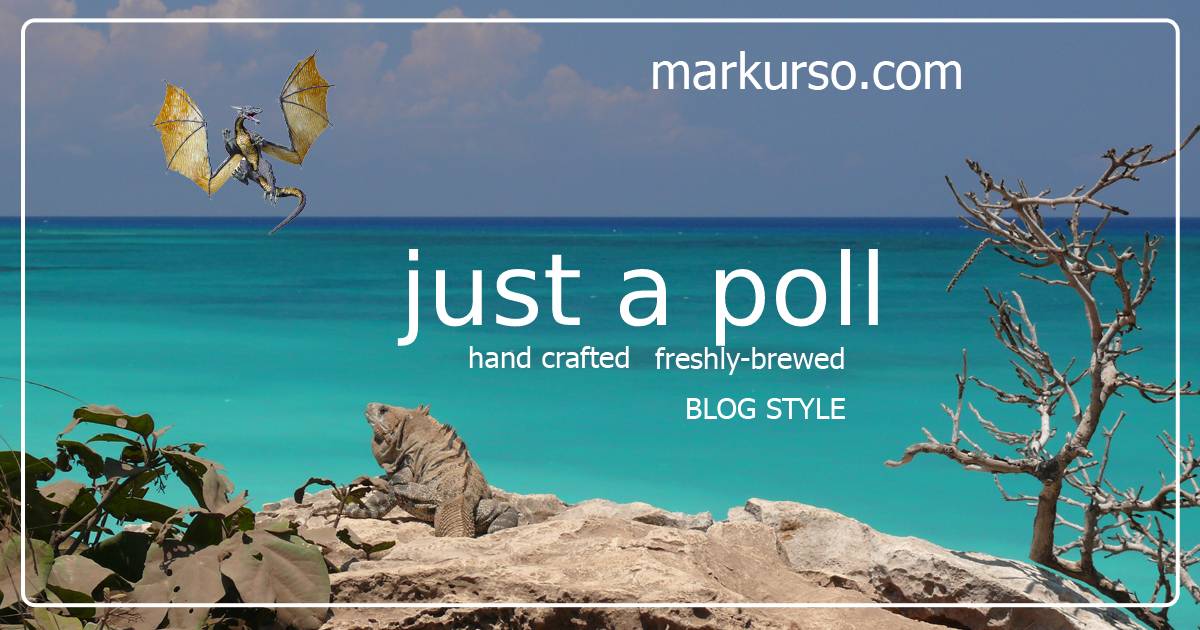 If you’re not a Twitter expert, I’ll fill in some info …

Here’s a screenshot of a poll taken by a Twitter user: 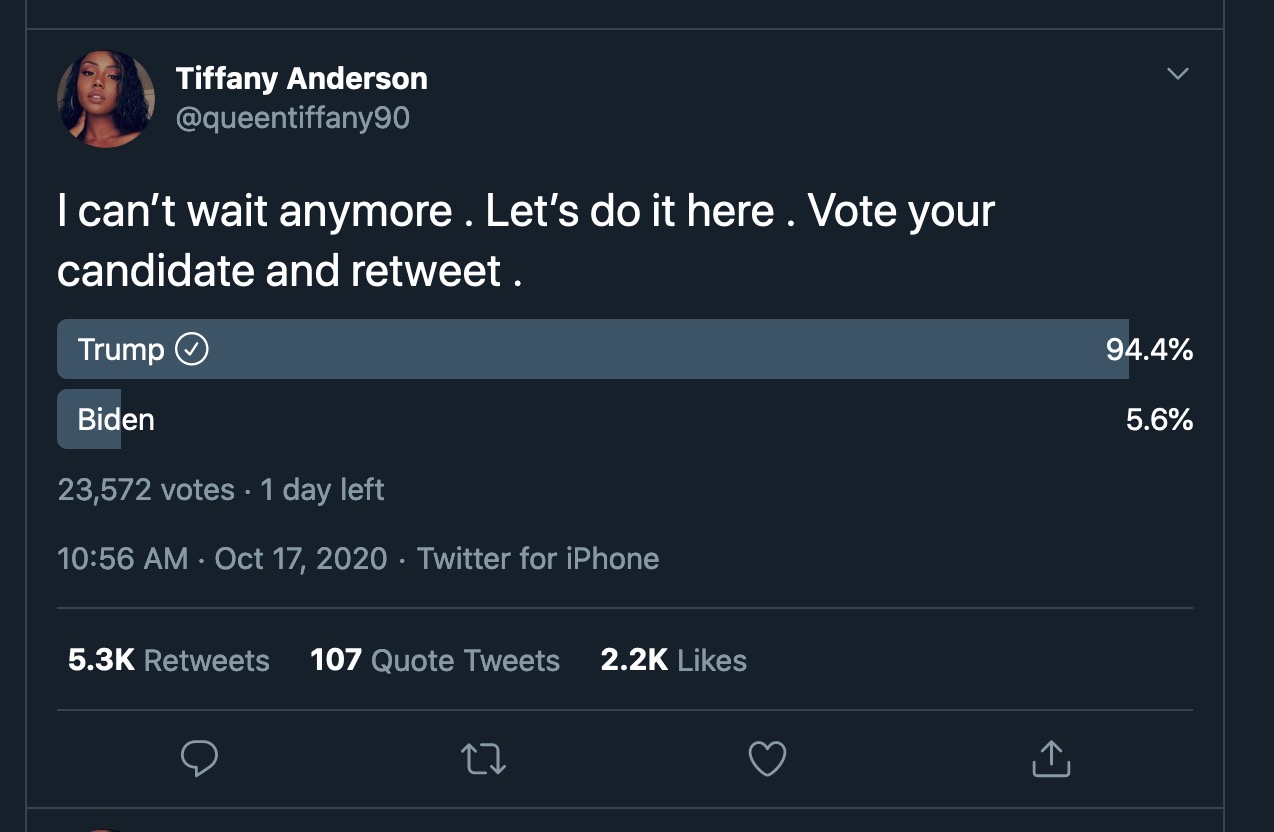 It’s easy to see, Trump is winning, according to this poll! But, really, Mark, what’s it worth? Other polls (many of them) show Biden winning, or a neck to neck race! This is crazy. Stop posting ridiculous things!

Tiffany Anderson has only 303 followers. That’s important, because she’s the one who posted the original poll, about two days ago; the poll will be ending today, sometime (Tuesday). Click through to the Twitter post by clicking on the poll shown above; it’s an image link.

This is what happened with this poll:

Anyone can join Twitter and “tweet.” If you want, you can create a poll, too, about just about anything. With her stats, you can see TIffany isn’t a legend on Twitter, she’s a casual user, with few followers, and she follows twice as many people as follow her back. This kind of user is distinct from a Twitter super-user; for example, celebrities and politicians often have hundreds of thousands of followers and they themselves follow almost no-one, a sign of domination!

The President currently has 86-million followers, as an example.

So, Tiffany is a new user (or a not-often-user).
This is important because ….

Because tweets grow by being “retweeted.” Therefore, if I tweeted out a poll, to my about 2500 followers, they might see the tweet, and others may also, people who don’t follow me. A disconnection from myself, my “group,” and my relationships (affiliations) happens upon the first level of “retweet” – in other words, I may not know the retweeter’s audience, and they may differ in favorite Twitter topics from me. Think of it this way; I trim my list of “who I follow” and I block people, often, on Twitter, intentionally friending those folks I enjoy seeing and sharing with. In this environment, and because I write about current events, my entire 2500 is Trump fans.

But that isn’t true about Tiffany! At least we don’t know any details, and it wouldn’t matter, anyway, as you follow the tweet’s pathway …

Because of the way the tweet started, and grew, through over 5000 retweets (see screenshot above, showing stats), the poll, handed off to Twitter’s organic, unadulterated retweeting pathways with a relatively tiny source of known potential pollsters (relative to the huge number after retweeting), represents a pure, decent-sized sample!

It was up to Twitter, using whatever algorithm shows things (in a random way) on individual users’ news feeds (which show general stuff, often from people you don’t follow or relate to on any level), to determine who voted.

The path of the poll: Tiffany creates it. Immediately, in their news feed, a follower of Tiffany will be shown the poll – if every one of her followers voted (which of course they didn’t), that would be 303 votes out of 24,000.

Now what happens? Two things. One, the poll gets randomly shown to anyone on Twitter. Two, the poll gets shared, or “retweeted,” by someone. This could (less likely) be one of Tiffany’s followers, or not (much more likely).

So 23,000 votes on this poll are shown. They are not pathway-accountable in any way, so should be considered random. The only other way you could consider them is as shown based on Twitter’s own leanings, literally mechanical leanings that effect visibility, or user preferences, of which there are few (and those are not commonly used). It’s Twitter-randomness.

If Tiffany had any influence, as the “original poster,” on how Twitter shows the poll (which is supposed to be considered random by users), even still, the leaning of users would be left, just based on the phrase “black lives matter” on her profile, leading me to guess she might have anti-Trump followers. That’s a bit of a leap, but it really doesn’t matter.

Oddly, as right-of-center and extreme as this poll looks, it’s actually the most transparent, scientifically-credible and authenticated poll I’ve seen. That’s hard-to-believe, sad, and amazing. Quite a poll! It’s also the one I think is closest to the truth. The results are hidden before you “vote,” the vote is available to any user who sees the poll, and there’s little to say about curious backroom practices; if there are any, it’s equal opportunity partisan-wise, and Twitter algorithms (based on Twitter recently censoring a high-profile news story) would only lean the whole thing left.

But it went WAY right.

Good morning, my friends, and I wish you a wonderful day!