Time to bang a drum that makes no noise, beating my potential meaningfulness into the void we call mankind.

You are hereby exonerated for all the things you have done wrong.

After all, you didn’t know, and it’s not fair. Simple as that!

It’s not fair you didn’t know your child won’t be safe on the streets, with disrespected police quitting every day, nor in their schools, where creepy pervs may prey on them, courtesy of Democrats you voted for.

But you spoke for women’s rights!

It’s not that people don’t understand the issues.

In fact, people do even better; they under-understand the issues!

Thus, we get votes for the guys that support the inflation reduction act!

Whatever that is. … I mean, it sounds good.

My opinion is muted, but like a dog humping a couch I still try. The inflation reduction act is a fake title, a complete lie, if you allow yourself to believe it’s about inflation reduction. It’s about climate change, a topic Democrats in charge hold so dear they hide it from you.

They lie. They’re lying to you. Your people, not mine. It’s easy to see.

“Well, I think people should vote Democrat because of women’s rights!” That’s Kool-Aid talk. You still have rights; provided by your state, and you can still complain about them.

Roe vs Wade falling sounds important, but it’s not. Not as important as election tampering so bad it’s changing results, which you choose to ignore. We may never escape. But it’s surreptitious, so you’re innocent.

Poor us. Vote Democrat. We know we need more peace and love.

Kari Lake and her slippery opponent may as well be in a cage fight and you wouldn’t know. It’s too late to teach you. Your party is spitting in your face, and you fell for it, again. You VOTED for it.

But let’s be fair! Knowing may be too much to ask. Whoopi doesn’t use facts, but goes for canned applause instead! It’s shiny and friendly, and puppies and kittens, and … well, you didn’t know.

You don’t understand why I vote the way I do. And I disagree with the way you under-think. And the results will be enjoyed, for years, maybe forever, by both of us. I’m beginning to see. I can either fight for what I need, or give in and watch you enjoy your faux victories. 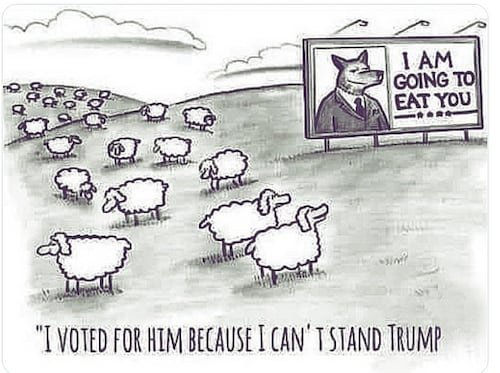 Are you a single mom? Seventy percent of you voted Democrat. So get on that bandwagon! What would others think if you didn’t announce on Facebook you voted Democrat? Other free-thinking, open-minded liberals are expecting you to vote that way, because you’re a single mom. Rock solid, fact-free logic.

For women’s rights? The constitution thing? You probably don’t go to church, though, ’cause that’s too oligarchical; you like little old men so Biden’s pretty cute (when he smiles) and you consider yourself a virtuous person. You’re aware of the option to move to an entirely different country, where you could take care of the child you didn’t abort (being a virtuous person) while the government will make other decisions for you. Just don’t go to countries where they take your babies away if you have too many (in their opinion).

Freedom is Not Free

In this country we’re burdened with complicated systems that take too much time to understand, and there’s always righteous religious nonsense mixed in, written right on your dollar bill! The Constitution in this twisted, biased country is riddled with God and God-given rights. And you’re better than that!

Truly, it’s amazing we’re alive to experience this. Even just a single breath is not guaranteed. We still look to each other and claim pride. Is it gut-wrenching to drum it up? Liberal pride vanished when gays stopped having parades and let BLM throw bottles full of gasoline at law enforcement on their behalf.

Do you know where your child is? Staying out past street lights these days has a whole new meaning. How could such a thing happen?  It’s not fair to parents for liberal progressives to change the scene without telling anyone, but many parents are liberal progressives, so they should comply, even if their kids are taught ungodly things. Be sure to vote accordingly!

Biden looked at his watch instead of showing respect for soldiers who died. But that’s not in YOUR wheelhouse. On veteran’s day you did some nice stuff, or at least you thought nice stuff. That should take care of your white guilt for a little while.

Student loan debt? Ha! Victim! You lose. But … um you’re innocent. It was a political stunt. Illegal from the start, brought to you by the same … I should slow down. I know you’re putting a tapestry of precious facts together. This is at least as important as reading the cereal box with your breakfast.

Kids being told they’re bad just because of the color of their skin. You okay with that? Worth reading up about, but I understand, if you just love your kid and don’t have more time afterwards. The head of the teacher’s union in the US is a pervert. Perverts are everywhere! But it’s not you! Or … is it?

As long as Democrats keep cheating, this will all continue to happen. But you didn’t know that, so it’s okay. Obama hates this country and we reward him by giving him the keys. Now he’s sitting back calling the shots … Hobbs in, Beto out …

I hope you really like Obama, ’cause he is your new God.

Or the devil. Be honest. How are we to know?

Take a seat, watch! Just be careful answering the door. No-one is to be trusted.

It’ll all be fine. Right? You know that, right?

You’re the one with the pen and ballot. You know what’s at stake. I’ll trust the system and your gut.

So happy we talked.