I sure hope (and I really do) vaccines are safe. I don’t usually venture into speculation about professionals in healthcare, but the politics surrounding COVID should have everyone concerned! Pfizer stock will keep going up, while we look to our personal doctors for best advice.

Hospitals are, oddly, allowing a political scare tactic to coerce them into firing thousands of nurses; a plight that’s not unique to healthcare, and which has taken shape as a protest against mandates in the airline industry. COVID numbers are oddly difficult to find (sometimes, not always) and are always skewed when reported to the public by the public’s favorite media.

It’s the same politicians making decisions around these things who’ve left a southern US border open for over a million illegals to freely enter, with no vaccination plans for them, nor requirements for them to either get vaccinated or become citizens. So many young immigrants have been rounded up, we’ve seen images of camps where they eat and sleep. These are the same politicians who are lying in your face about indoctrinating young children (all of them who attend public schools), to wear masks all the time and obey vaccination orders. It’s easy to imagine the new kids in the sleep camps are also being taught the new ways, at the whim of not parents, not responsible adults, but activists.

At the heart of the matter are nurses and health pros, who have been called heroes, and for good reasons. Watch it morph into “domestic terrorist” when those same nurses choose not to take a jab.

On the front lines is Ramona Bessinger, of Jamestown, RI, who’s uncovering the nebulous truth about what teachers are doing in classrooms that today need 24-7 video cameras. The world’s had two years to get used to zoom meetings and online learning, and an unintended by-product of the experience is we’ve seen what goes on in classrooms, and it can be very unnerving.

Does “woke” belong in the classroom? Bessinger is sure it doesn’t.

The RI Center for Freedom and Prosperity: “On multiple occasions, Bessinger called out state education commissioner, Angelica Infante-Green, for being responsible not only for the influx of the dozens of new “unvetted” leaflet-style books from “unknown” authors, but more disturbingly, also for trashing the entire curriculum of proven historical and literary works by renowned figures such as Anne Frank, Martin Luther King Jr., and Shakespeare.”

Bessinger filled out her self-description on Twitter thusly: “Wanted by the Department  of Justice for teaching children how to read, write and think for themselves.” Now that’s my kind of teacher! 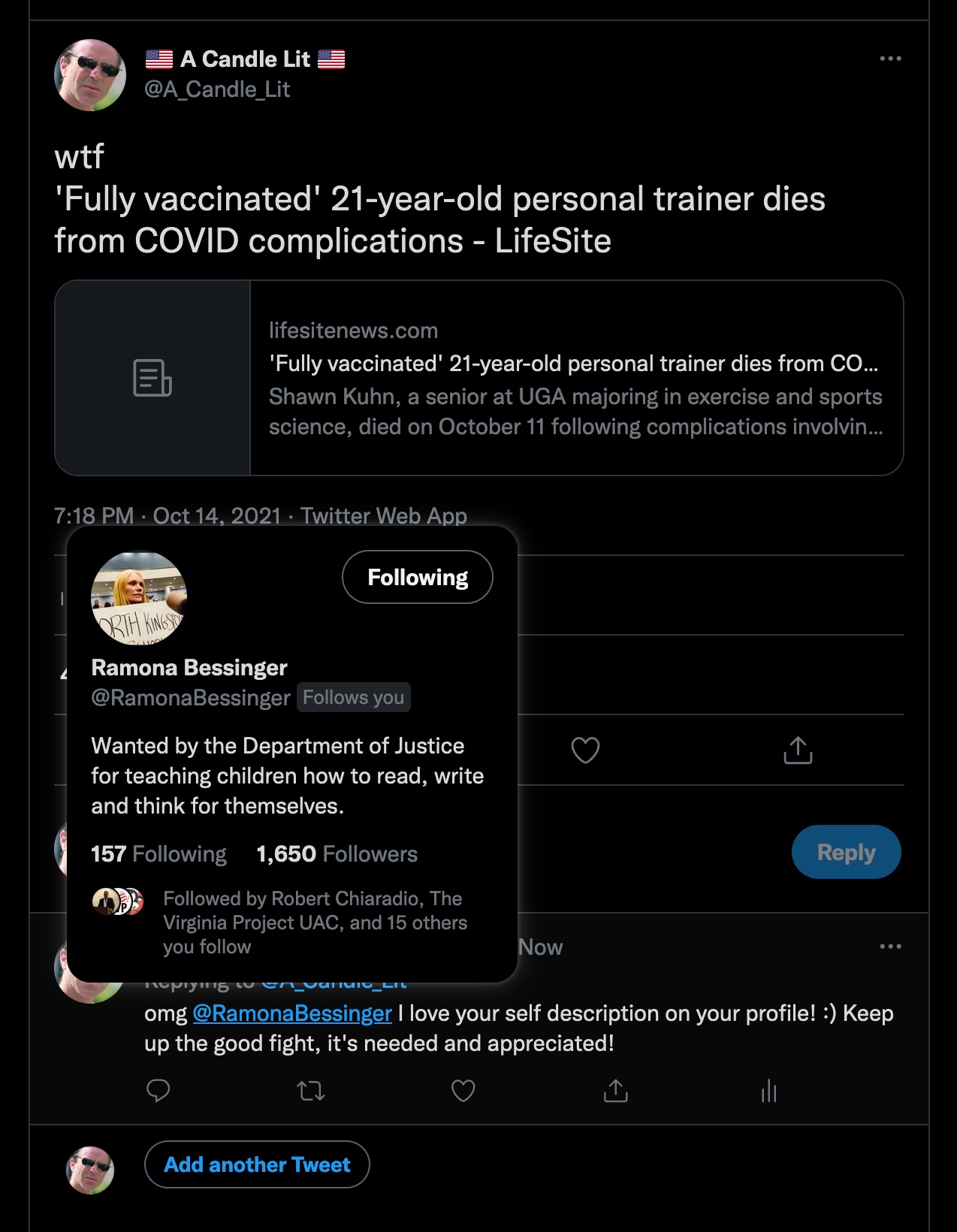 Today, Bessinger is facing losing her job, as the leaders we elected stand by and watch. To imagine they are complicit is simple logic.

Bessinger told Legal Insurrection “I asked a teacher leader what was going on and he looked jokingly at me saying “Comrade, we were told to remove all classroom sets of reading material in order to make room for the incoming sets of books.” I laughed, assuming this was a joke. But it was not a joke, this was real and happening in my school, in my classroom.”

“Midway through the academic year, some students started calling me “America” because I was white. These students, whom I love, were turning against me because of my skin color. I don’t blame them, I blame the racial narratives being forced upon them in school.”

Now, “The Providence School District has notified Bessinger she is being brought before a pre-disciplinary panel convened on the pretext that she allegedly violated a school safety rule.”

Surrounded by the Unknown

Sadly, one of the most disturbing aspects of the whole scenario is the tactics used by instigators, who may claim to be honest people, but who can’t claim much because they’re coming out of the woodwork with fake social media accounts, aimed directly at Bessinger. Another tactic: public harassment of an innocent woman who cares about our children: “The harassment intensified. Sometime in the afternoon of Tuesday, October 12, when Bessinger was not present in school, someone defaced her classroom blackboard with threats and taunts against her, and then photos of the whiteboard were tweeted at her by unknown and relatively new Twitter accounts.”

Thank you Ramona, for fighting for America and for decency. It’s as simple as that. This is a battle that can’t be “confused” with colors, fires and twisted language. When our kids come home from school, all responsible parents will quickly learn what’s really going on. And we’ll remember the work you’re doing against rooms filled with actors paid to harass you and an opponent who claims he doesn’t exist. You’re an angel on the front lines; whether you like it or not you’ve found yourself here, and you stepped forward. Bravo!