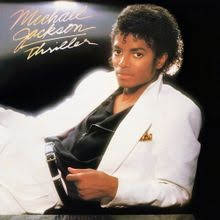 And embracing the possibilities of video, on old school music television.

It all started about 30 million copies ago!

Michael was the first black artist on MTV. This record changed the way people think about music and video. Michael had a mini movie for his video. He was foresightful and meticulous, and the world was just waiting to see what he would do next.

My three rhythmic runners-up are “Baby One More Time” by Britney Spears, Inner Circle’s “Bad Boys” album, which I used to love to listen to with my stepson Todd in the car, and “Gap Band 3.”

May the rhythm be with you!