In Oregon red-eyed birds can walk, though it looks more like dancing, on water.

Mudskippers are fish that walk on land, dig holes in the mud and prefer to be on land; the fins have what look like elbows as it uses them like a dog does its front legs. It looks like a fish with front legs; it’s eerie.

A chameleon’s eyes move independently of each other. The Venus Fly Trap is a plant that lures, traps and consumes its prey, a fly, successfully with no brain at all.

While the bear is bumbling with salmon there are dolphins creating circles of mud in the water and catching fish in their mud circle traps; these most intelligent animals look like they’re having fun!

Monkeys use stone tools like hammers to crush nuts, after leaving the nuts out in the sun for a week to become easier to break.

God shows us evolution in 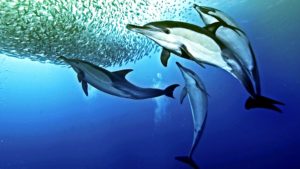 the moth and tadpole, crawling from the sea and flying into the sky and readapting to a completely new body during a single lifetime. In the lion, bear and dolphin, He shows us how to hunt, faultless killing similar to play. In the dolphins he shows us what an intelligent creature would do if it lived exclusively in the water. The go-to bounty is seemingly endless small, fast fish; the big, smart dolphin’s goal, given choices, is to have fun!

The farther we go from the sea and become more like intelligent mammals, the more time we spend in our families, like the Orangutan, raising our young. We are surrounded by the modern and the primitive – the underlings of the food chain and the unchallenged champions, dinosaurs, dragons and humans … even … toads that eat tarantulas. 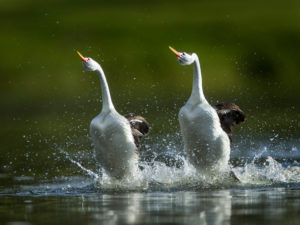 In Oregon, the Clark’s Grebe, a red-eyed, Elvis-wigged bird similar to a cormorant or loon, does even better than walk on water; they dance, in synchronized pairs; then at the end of a long Snoopy-like footwork trip across the water’s surface, both fowl disappear … with a graceful dive, leaving just a wake and a breathtaking vision.

There is a bat in China that, although it is blind, can not only fly but catch fish, by detecting ripples on the water’s surface. There’s something important about perspective in the blind bat story.