Donald Trump,
The Greatest President in US History

The website Disrn announces today “Donald and Melania Trump launch the official website of the 45th President of the United States. The site, 45office.com, is intended to allow supporters to keep in touch with the former first couple, request participation in public events, and gather general information on Trump’s presidency.”

Disrn says “Though the current features on the website are somewhat limited, it is possible that the site may offer a central hub for Trump to communicate and issue statements and commentaries on current events following his ban from social media.”

Meanwhile, Trump is also setting up his own social media site, to directly compete with Facebook and Twitter, both of which have censorship based foundations. Huffpost joined the Boston Globe (and other hard-to-read msm sites) telling us … “Former President Donald Trump, who remains blacklisted from numerous social media sites, is planning to launch his own social media platform in the coming months, one of his advisers said Sunday.”

Jason Miller, senior adviser for Trump’s 2020 campaign, said on Fox News’ MediaBuzz. “It’s going to completely redefine the game and everybody is going to be waiting and watching to see what exactly President Trump does. But it will be his own platform,”

The Struggle is Real

The bullshit coming from msm should not be expected to wane. For example, YouTube CEO Susan Wojcicki said her platform may lift its suspension of Trump if  “the threat of “real-world violence” decreases, but that “may not happen anytime soon.” Of course, they’re looking in the wrong sandbox, and will continue to, for the violence.

MSM failed to report for four days now, on an Uber Eats driver who was the victim of a carjacking/murder by two teenage girls in Washington, DC . which apparently doesn’t fit the liberal satanist narrative, probably because the murderers were black. Redstate reported “Two black teen-aged girls, reportedly 13 and 15, allegedly tried to carjack 66-year-old Pakistani immigrant,” a botched joyride that ended in cold blooded murder in broad daylight, clearly a sign of unbridled violence that’s been seen worldwide but downplayed in order to allow the public’s fear to fester.

Why no coverage? Because we can’t trust the media, any longer, at all.

But maybe the better point is, the violence is endorsed by the fear-mongering left, and has never been caused by supporters of Donald Trump. Never. While the fake Vice President can’t do anything but giggle with nervous joy.

goodbye sanity.
– Kamala Laughs Again: This Time Over Parents Who Want Their Kids in School https://t.co/n9ykDF30bV

Laughing when your kids are at stake. Par for the course. Murder? Not a bad thing. In this reporter’s opinion, the new Trump website and the new Trump Twitter alternative will both achieve unprecedented success. We watched Parler fail to understand the scope of top 100 websites, because it’s impressively expensive to create one.

So let’s watch it done right this time.

Below, the “About“ section from the new site describes a turnabout in politics and attitude of hope and tolerance Americans wish to embrace and nurture, while left wingers do their best to quash it. 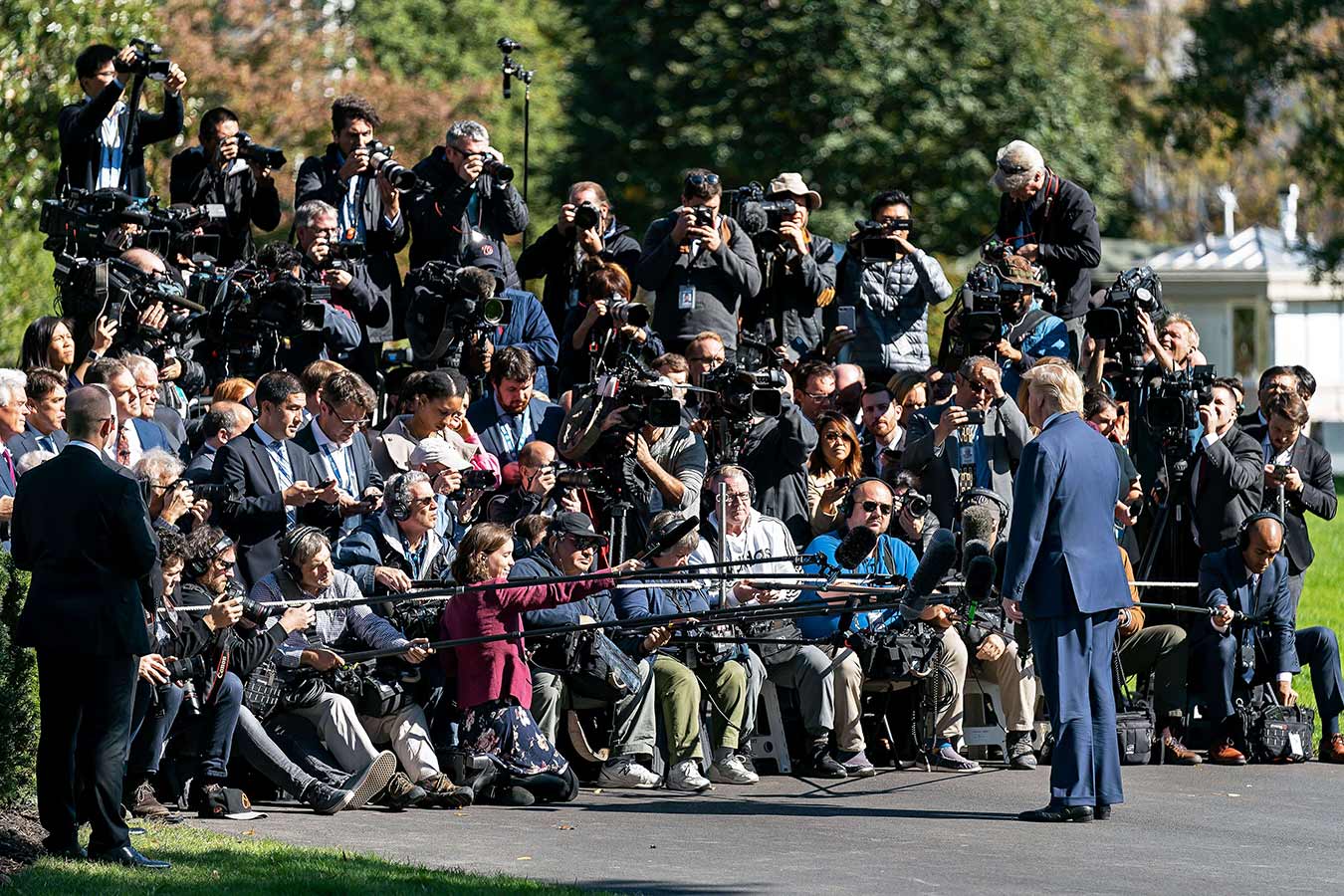 The 45th President of the United States

The forgotten men and women of America were forgotten no more because we finally had a President who put America First.

Through his pro-American policies on trade, taxes, energy, regulation, immigration, and healthcare, President Trump ushered in a period of unprecedented economic growth, job creation, soaring wages, and booming incomes.  Median household income reached its highest level ever recorded. Middle-class family income increased more than five times from the previous administration.  Unemployment reached its lowest rate in half a century.  African-American, Hispanic-American, and Asian-American unemployment reached their lowest levels ever recorded.  And more Americans were employed than ever before.

President Trump boldly unleashed American energy, and our Nation soon became the world’s number one producer of oil and national gas in the world.  America’s newfound Energy Independence not only meant historically-low energy prices, but also bolstered our economic and national security.  At the center of this pro-American energy vision was a robust commitment to environmental conservation, renewable energy production, prioritizing the clean-up of major pollution sites, and investing billions in clean water infrastructure.  Under President Trump, America led the world in reducing carbon emissions.  As a steward of our natural resources, President Trump signed the Great Outdoors Act, the most significant investment in our national parks since Theodore Roosevelt’s presidency and joined the One Trillion Trees Initiative to protect and restore one trillion trees by 2030.

As President, he was an unwavering champion for our Nation’s heroes in uniform.  He always stood proudly with our Nation’s extraordinary and courageous police officers, sheriffs, and law enforcement professionals.  He fought relentlessly for our Nation’s military service members and invested trillions of dollars in the American Armed Forces to ensure our warriors had the tools, support, and resources they need.  He fundamentally reformed the Department of Veterans Affairs, ending the past era of scandal and ensuring our Nation’s treasured Veterans were given the treatment and care they have earned and deserve.

Understanding that border security is national security, President Trump achieved the most secure border in United States history and signed a series of historic agreements with our partners in the Western Hemisphere to stop smuggling, trafficking, and illegal migration.  He fundamentally reformed the H-1B program to protect American workers and families.  He restored the principle that newcomers to our country must be financially self-sufficient.  He empowered Immigration and Customs Enforcement to dismantle criminal gangs and deport dangerous offenders who threaten our communities.  He ended systemic asylum fraud, reduced refugee admissions to sustainable levels, blocked the entry of terrorists and national security threats, and banned unsafe travel from regions where proper screening and vetting cannot occur.  No President has done more to build an immigration system that promotes safety, dignity, security, and prosperity for the American People.

By restoring America’s prestige and advancing a policy of principled realism, he forged historic peace agreements in the Middle East, withdrew troops from endless conflicts, confronted oppressive communist and socialist regimes, advanced stability around the world, and strengthened the North Atlantic Treaty Organization and other international alliances and partnerships by getting other nations to contribute their fair share.

When the coronavirus plague arrived from China, afflicting every nation around the globe, President Trump acted early and decisively to ban travel from China and Europe, which saved countless lives. He launched the greatest national industrial mobilization since World War II, refilling our depleted stockpiles of medical supplies, bringing our critical supply chains back home, pioneering life-saving medical treatments in record time, leveraging the Defense Production Act, mass producing and mass distributing masks, gowns, gloves, and other protective  equipment, and getting new breakthrough therapies into the hands of hospitals, doctors, and patients.  President Trump, from scratch, built the most robust testing system in the world and, at his direction, temporary hospitals and new medical beds were built from scratch to keep hospitals from overcrowding.  Aggressive action was taken to get critical supplies to nursing homes in order to protect the most vulnerable among us.  Through Operation Warp Speed, the Manhattan Project for vaccines, two different and powerfully-effective vaccine candidates were approved in record time, with more vaccines following quickly on their heels—a true medical miracle.  In order to get these doses to the population as quickly as possible, all of the leading vaccine candidates were manufactured in advance—an industrial breakthrough that further saved countless lives.

Whether it was combating the virus, fighting foreign terrorists, creating jobs, securing America’s borders, unleashing American energy, revitalizing American patriotism, or restoring the American spirit, President Trump never wavered in defense of our values, our families, our traditions, and our freedom.

President Trump knows that as long as we remain faithful to our citizens, our country, and our God, then America’s best days are yet to come.

Peace and best wishes for the future! We can do this.