I had a fisher on my back porch last night. It chased my cat right into the screened-in porch. The cat smartly scooted under the couch but not before hollering for me. 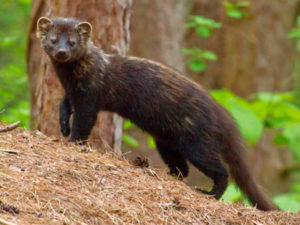 I heard her and came out from my room, and there was a very large “cat,” something odd about it … which had obviously chased her in, causing her to yell to get my attention – While I was immediately concerned for my cat and was looking for her (but she was under the couch), I didn’t really examine this supersized “cat” that was standing there waiting for me to tell it to go away. I went for a quick flashlight grab, returned, and the fisher was sniffing the bottom of the couch. I figured it out immediately and said “Get out of here!” and the animal departed quickly.

It was maybe ten last night. I’m in Westerly, RI, on the river in the Hiscox Rd. neighborhood. It’s old woods and streams but mostly residential. The fisher was a rumor for years, but now it’s real. 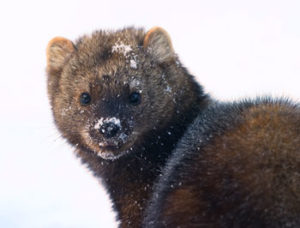 I figured out today looking at photos this was without a doubt a fisher. It looked exactly like the photos I’m posting along with this article. It was right there, I could have kicked it. The animal was not fierce-looking as you might imagine. It was very healthy-looking and appeared to have a demeanor similar to a cat. It was like a cat chasing a cat … which is what I originally thought – I just thought it was a really big neighborhood cat. This is because the fisher’s tail is very prominent.

This one is all black; its face looks just like a cat, but the ears are smaller and rounded. The posture and gait of the animal is more like a dog. When it sniffed the couch it looked like a cat, especially because it’s tail is big and makes you immediately think of a cat … but its stepping forward toward the couch made me think “what an odd, enormous cat!” because it seemed to have “shoulders” more like a dog.

This fisher is big, three feet long with tail extended, and the tail a full half of that. It could have easily weighed 10-13 pounds, a large specimen (and definitely male, as females are said to be half this size). The coat was thick, like a winter coat, and the tail was especially heavy-looking. It could be called, I think, a reasonably pretty animal.

It did not look like it would have been aggressive to me, although under the shield of darkness this animal looked capable of doing serious damage. It seemed to know it was in my house, and was probably submissive compared to being in its own environment. It did not show its teeth. The encounter was more relaxed than I would have imagined, as if the animal could not help but chase the cat, but was not that hungry for it.

My cat is hooked on the outdoors, and I’ll be keeping an eye on her. She stayed on the (other) porch with me most of the day today; she doesn’t run off uncontrollably but she does disappear. That’s a different story, I guess; who knows what Penelope encounters when she sometimes stays out all night?

I’m open to suggestions on how to relocate this animal and general information. And yes, I talked with Penelope about this! She promised to be fully invisible at all times when the fisher is around! I’m so glad she called for me last night; we make a good team!