What would a liberal do if the US government took away everyone’s guns, but the criminals all kept their illegal guns, and crime went on a surge? After all, it makes perfect sense.

Do people live in logical blindness?

It’s human nature to ignore, deflect and deny. Missing ingredients that would promote better logical thinking include open-minded discussion and less wishful thinking gone wild. In a world where everyone gets a trophy, wishful thinking and logic are on a collision course!

Breitbart News: “3 People, Including 2 Officers, Shot Dead in Stringently Gun-Controlled Australia” – an article which explains how difficult it is for a citizen to carry a gun in Australia, the process to apply is lengthy, and “self-defense is not a justifiable reason to get a gun license in Australia.”

With blindness in full view, daily available in news articles like this, it’s understandable some people … don’t understand!  Putting two plus two together requires an inkling of confidence and normal skepticism, neither of which are endorsed or supported by people who give everyone trophies, the modern coddling generation of parents.

They’re so quick to trust the government and news media, they don’t realize they’re insulting their friend, suggesting their friend’s information is bad, even calling it “debunked.” What most people seem to be doing, amidst the greatest political turmoil in their lives, is turn a blind eye, trust the news media, and personally take no stake, make no effort and give no thought to an issue when it’s put in front of them. It’s as if they’re actively participating in widespread propaganda by being very careful not to take a closer look, but it’s so easy to take a closer look it feels the neighbor’s ignorance could only be intentional.

The parallel to diagnosed denial, a concept millions of members of Alcoholics Anonymous understand, is perfect, though this is denial on a mass scale. The bad news is, real denial is a real problem, and doesn’t go away by itself once it gets momentum.

From my 2015 non-fiction book “A Candle Lit“: “It’s as if you woke up one day to find you had two systems of values, two personalities, two ‘operating systems,’ and it’s time to defend one of them. Unfortunately, a clear pattern of behavior strongly favors the new operating system. The decision to become irrational, to ‘go away’ from social convention, to ‘allow’ the devil to take your soul, does seem to be conscious and deliberate, but from there on out, decision-making has no rules and no accounting for (a typical mark of denial).”

In the world of mental health, denial is the beginning of the end.

On June 6, ’22, George Takei of Star Trek fame infamously tweeted “Crazy thought, but those 20 million AR-15s now in this country could sure arm a lot of Ukrainians.” 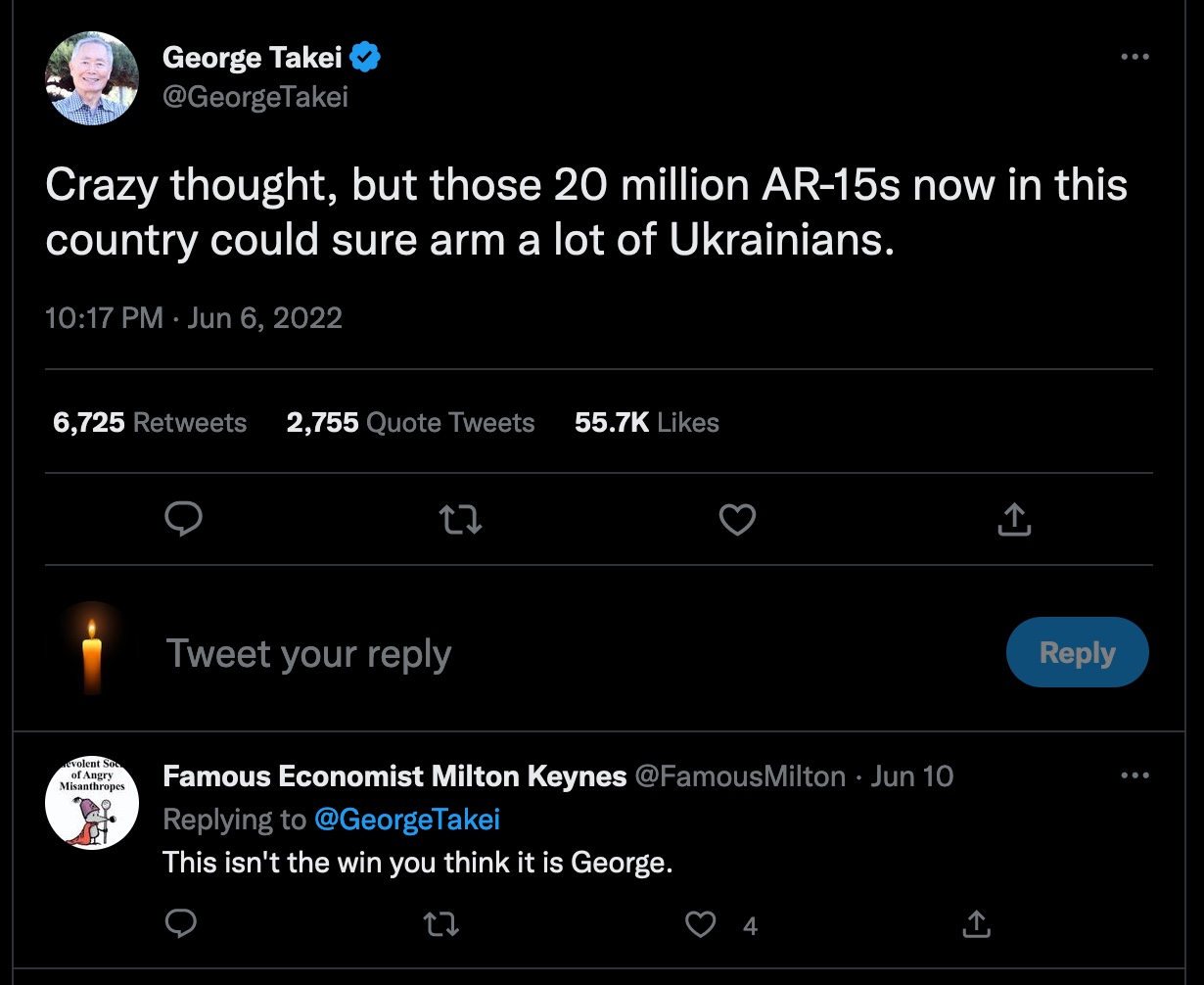 Did Takei give a thought to this statement before spilling it out for the world to absorb? It’s painfully obvious his thought existed in a bubble in his mind, carefully shielded by denial, spurred by momentum as it lashed out. The left is, after all, consistently supportive of gun control. Denial, though, doesn’t care about the details, and as a result, Takei took some interplanetary turbulence online, and the message of his ilk suffers inconsistency.

The only thing consistent is the falling apart of good, consistent, socially-acceptable thoughts!

While Anthony Fauci’s big coverup is being revealed by Elon Musk and by investigations in Louisiana and Missouri, the CDC has admitted vaccines don’t work, and many people suspect they’re dangerous, Fauci told MSNBC lives have been lost, but not because of the vaccines, because of the unvaccinated. This man is a perfect example of digging too deep to recover. “If you say something or do something to dissuade people from getting vaccinated, then lives will unnecessarily be lost.” The TV interview was basically a hit piece on the American people. Expect it to continue.

The fact is, vaccinated people are dying from COVID in greater numbers than unvaccinated, reinforcing skepticism and threatening the credibility of medical science. Those sick in denial (including the media) seem puzzled, forced to interrupt their brain laziness to come up with a retort. The official responses to the issues are presented by Fauci; ABC news tell us the exalted expert said “’I don’t recall’ 174 times, including when asked about emails that he sent, interviews that he gave, and other important information.”

This doesn’t budge the mud-sitting liberal denier, who reads Reuters next, supporting the swampy squad and its new thinking … “Statistics that show the majority of deaths from COVID-19 are among vaccinated people reflect the fact most people are vaccinated, not that the vaccines are ineffective, as implied in a social media post.”

COVID vaccines are clearly ineffective. It’s not being implied; it’s been proven. No-one seems to want to “know.”

It appears the truth is unpalatable for most humans.

All this isn’t a new dynamic. While we get fat drinking Diet Cokes, certain the ingredients are generally good for us, lazily hunched over pillows on the sofa, trying to get the best denial position for watching the nightly news, my fear is we’re all going to die of something.

But it’s probably not going to be the soda!

2 Replies to “The Blindness”