Sir David Frederick Attenborough is an English broadcaster and naturalist. Among his numerous awards: The coveted 1974 Commander of the Order of the British Empire (CBE) (The Most Excellent Order of the British Empire is the order of chivalry of British constitutional monarchy, rewarding contributions to the arts and sciences, work with charitable and welfare organizations, and public service outside the Civil Service, just in case you didn’t already know).

He’s a narrater, a voice for documentaries; in England some call him a national hero, and he has many other titles. He’s an adventurer and nature lover. He knows a lot more about nature than I do. 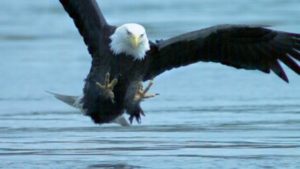 One of Attenborough’s projects, “Nature’s Great Events” (2009), shows a bald eagle multiple times repeated, so you can see it, fishing from the sky. The bird, in the wink of an eye, focuses on a single fish, and swoops down and just plucks it right out of the water, in flight the whole time. Sea and sky merge with the unsuspecting fish suspended in the bird’s claws and flying through the air. The actual “pluck” is almost invisible in “regular” speed, but in slow motion, the eagle’s accuracy and grace are almost unbelievable. You can’t help but think “Show that one more time!”

The same episode follows salmon around the world, and suggests they follow a line they can see, but we can’t, that’s produced by the earth’s magnetism, a magnetic stripe from pole to pole, leading millions of spawning fish to a single destination in Canada year after year. We may be just beginning to understand the salmon’s global positioning system. They’re just fish! But they seem like a container for nature to hide some universal secrets!

When they finally reach their spawning grounds, jumping waterfalls the whole way in, the fish seeming themselves to be in flight, it’s not an eagle looking to grab them, but clumsy bears teaching their cubs how to catch a proper meal; this procedure, in nature’s all-fairness, wouldn’t look graceful at any frame rate! Nature is teaching us balance, and how it provides for survival – showing us success comes in all shapes and sizes, to each its own; things are constantly bumping into each other, but it constantly ends in natural balance; an odd kind of balance any scientist could probably see, somehow, as perfect.

The bears, after all, wait for months for the opportunity to stand in icy rivers on the edge of the cliff of a waterfall, so they can have a tasty salmon jump, blindly, but perfectly, directly into their mouths. To anyone but a bear, the odds of such a thing happening would be staggeringly bad. But, as more fish are surely on the way, we should no more feel we should help the bears catch a fish as we should think we can fly like a bald eagle. The secrets of the universe are not just in the different capabilities of these animals, but in the natural general overall balance; it’s clearly not one animal that always “wins.”

Fish, bird and bear balance.
Attenborough tells us it’s possible Pacific Salmon “feed more life than any other animal species on the planet.”

Attenborough’s own take on years of studying the earth? Organic evolution runs the planet. In 2013 he told Radio Times “We are a plague on the Earth. It’s coming home to roost over the next 50 years or so. It’s not just climate change; it’s sheer space, places to grow food for this enormous horde. Either we limit our population growth or the natural world will do it for us, and the natural world is doing it for us right now,”

He told the Daily Telegraph famines in Ethiopia are “about too many people for too little land.” and called the U.N. sending them bags of flour “barmy.”