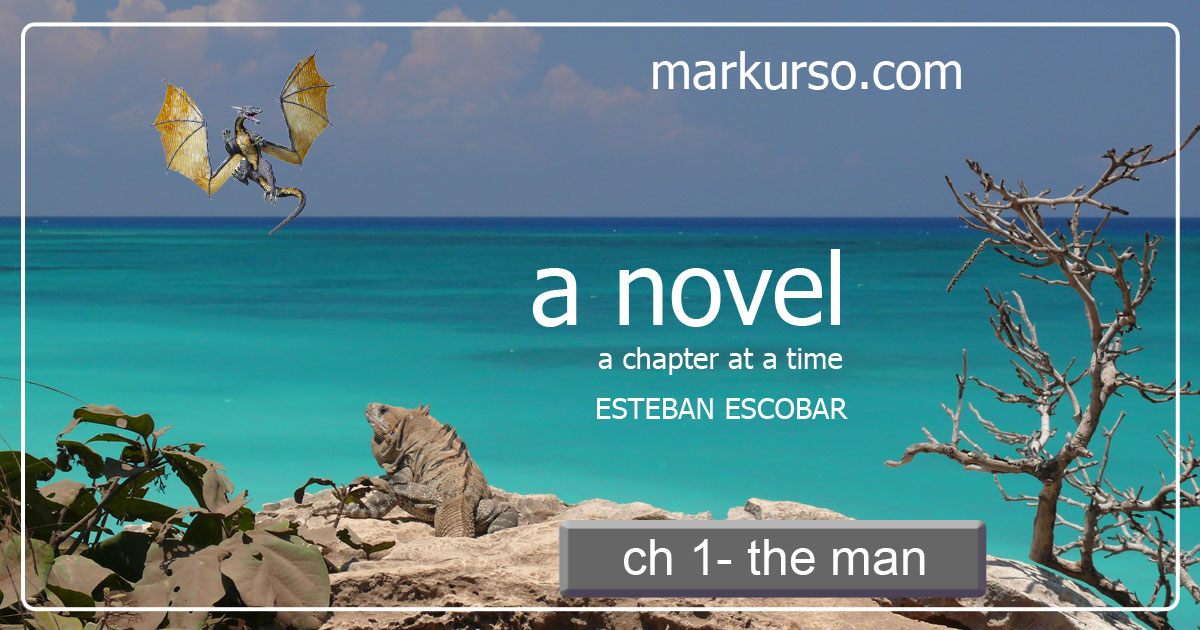 The beginning of an exciting new thing!

Esteban was alive! That he knew for sure! This assurance came with a deep breath of warm Colombian air overtaking his lungs, as he lay in a modest bed at his mother’s house to face the night. The instant before he fell asleep, he thought he heard a mouse in the ceiling. If true, this would be pure injustice to this man of determination and means, who had wisely and successfully gifted a cat to his mother just a week earlier!

Esteban Elgato Escobar Gaviria, the man in bed, is one of the most dangerous criminals in the world. The dream he has this night in the past will be, someday in the future, legend around the world. But, still, it doesn’t mean he’s afraid of mice! Far from it! He very much, though, does want to get the mouse!

Our story begins (and sort of ends) with Escobar bunking at his mom’s, outside Bogota, in a street-war-torn neighborhood, but nevertheless a neat and decent house. Esteban has his own house, actually a palace, but had to leave during the extermination. He had a mouse problem, he was sure, and the exterminator recommended he sleep elsewhere tonight. At his mother’s, he was treasuring the idea of sleeping mouse-free, fully expecting her new cat to be 100% effective in short order.

Maybe the dream was triggered by a mouse. Or maybe there wasn’t any mouse. Maybe the mice are all dead! … Maybe not!

As Esteban “entered” his magical dreamland, head on pillow, the annoying noise in the ceiling may have set doubt on his stage. Oh, what was it! The clickety-clack of little feet … or … maybe it was nothing! During the night there would be police sirens in the distance, even a freight train to the north, in the wind, but none of it entered Esteban’s dreaming ears; he was stuck on the mouse … if there was one. If there was, Esteban might take it … personally.

The mouse can talk … in the dream (which is just getting started now) … that mouse.

And it does, and it’s wearing a suit and scarf! It even reaches out its little mouse hand, as if to shake, and says “Hello, my name is Cesar!” with the squeaky dynamism of a determined bookkeeper; just like you’d think a mouse would sound!

The two are face to face, man and mouse, at a small table in a cheese shop in London called “Tom and Jerry’s,” being served by more mice; they’re everywhere. The little mouse across the table, in the suit, calls Esteban by his first name, and Esteban finds his annoyance grow. “My little mouse!” he commands with a Colombian brogue, across the … little … table … “What are we celebrating in my ceiling!”

“I know all about your drug smuggling, Esteban,” … the big threat with a tiny little dreamy mouse voice injects … “and will tell the police!” to which Escobar recoils, anger in his voice: “Who are you little mouse!”

At this point the dreamer, for the purpose of stubbornness alone, completely ignores the original introduction presented by Cesar, during which the little guy clearly stated his name. “Do you have no name?” Esteban persists, “Puny mouse with no name! Call me by my name all you want!”

Cesar speaks English and Spanish, and talks very fast, and the scarf doesn’t reveal his heritage, so Esteban labors over exactly what kind of accent Cesar has.

“Why do you look at me, Esteban, like you are so superior?” Cesar starts, like DiNero in fast forward … “I have friends too, you know!” … wiggling in his chair, but maintaining eye contact … “And I promise you, Esteban, you will never kill all of us!”

The mouse grabs a big hunk of cheese off the platter laid out on the table and gulps it down. Escobar can’t decide if he should worry or if he’s trapped in a cartoon! Cesar hops up, off the chair onto the floor in one swift motion, turning to leave with a glance back and final swipe at this much-feared man … and a graceful mouse scarf-flip: “You take care of it. I never pay!”

There would be no white stallion in the ensuing dream-battle. Esteban was a man of action. Versus a mouse, he’d win easily. This, after all, Esteban thought, about himself, for a second, was the man they called “Bogota Bunny” in high school, where Esteban was very good at soccer! This mouse didn’t stand a chance!

Now Esteban felt a chill and the dream started to sound hollow; they were at an old warehouse. The talking mouse wearing the scarf was, along with eight other mice, also wearing scarves, put before a twelve-cat firing squad designed to alleviate its participants of accountability, execution-style, by ambiguity. The mice mumbled, like mice do, and Esteban heard a distinct “Hello! My name is Cesar!” among the tiny quibbling voices, all filled with anticipation. They were all about to be killed, but were busy introducing themselves to each other! “Hello!” is, after all, one of the only things mice ever, normally, say!

This was a vivid dream Esteban would remember easily when he awoke. He’d be excited to tell his men the story, and they would laugh at the part where one of the mice might have escaped! As if it were worth hunting down after all that!

And which I hope you may have suspected, and, hope you won’t be surprised to find out! This is what will become known, in Colombian oral tradition, as “The Assassination Dream.” And while it’s all about who lives and dies, all we really know is the story lives!

Upon execution of the actual execution (in the dream!), all the “dead” mice fall into a pre-dug hole, and one, although we don’t know which, is only hit in the ear and not killed, and so cleverly falls into the hole and pretends to be dead, making him essentially “invisible,” and allowing him to escape! No-one knows this, although a conspiracy would later be theorized!

And thus ended the famous dream.

One could also say thus began the famous dream!

It would gain reputation and vigor, and achieve the ultimate goal of any dream, being recited (soon) … and eventually spread … like a massive wildfire!

A mouse would walk the Earth, too, one that doesn’t speak of his near-death experiences, a suspicious, very nosey, but friendly character. Esteban, knowing what he’s not supposed to know, will suspect there’s a real mouse, or a bunch of the nasty devils, toying with him with unholy and obviously unfair mouse powers.

The man will persist, but all-the-time bitter the secret is stuck in a mouse-made dream trap!

(end of chapter ONE)