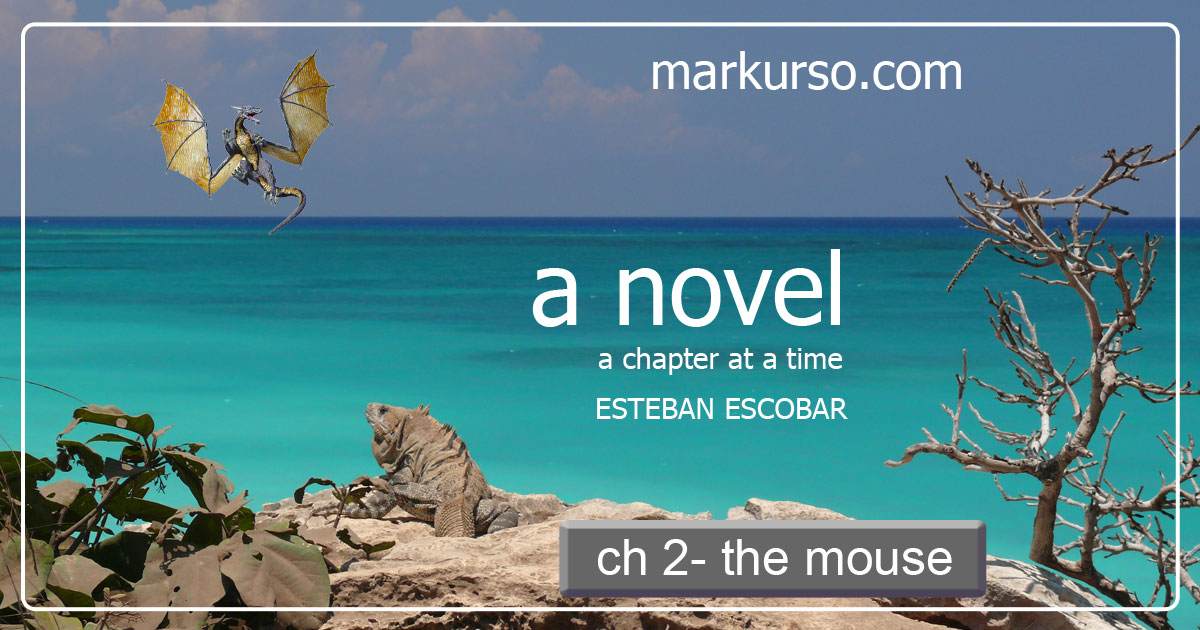 In the morning, Esteban felt refreshed! He remembered the dream, and it felt annoying and distracting, and he was excited to go to the palace and make sure the extermination went well. When he got there, his men approached him, and one, not knowing he had hired an exterminator the day before, but knowing he loves when people give cats as gifts, had a lovely shiny black one for him, which made him happy. He rejected it, though, on the notion he didn’t need it.

While the men were standing around, one of them holding the orphaned gift cat, Esteban told them the details of his dream, about the cats lined up with rifles, and the mice wearing scarves, and as the orphan cat wiggled, and its man tightened his grip … but … alas, just as Esteban got to the part where the rifles went off, and one of the mice pretended to be dead, and then escaped … and the men erupted in hearty man-laughter (as you might imagine), and just as one of the men called out (in Spanish) “The mouse lives! He is incorruptible!” … to which Esteban heartily called back “That would be trickery! Only one of us lives!” … that shiny cat leapt out of the man’s arms fully, finally, and fast as night … into the darkness … and … maybe – not sure – it happened fast … chasing … what seemed to be … possibly … a … mouse??

In FACT, none were seen. No mice.

No more cats either!

Technically, as you will see if you follow the cat and mouse, as our protagonist will unknowingly do, Cesar the mouse, wearing a tiny scarf, actually decided right there and then to get out of Dodge, embarking on a fascinating, circuitous and hard-to-follow journey.

Mice, after all, can be seen, but not believed. One can be invisible, or – hiding in plain sight! These critters show up in impossible places, their simple lives based on being unpredictable. And when we say “they,” we sometimes don’t know at all who they are – just a nebulously-visible demonstration of trouble!

Meanwhile, the real Cesar is a busy mouse, although he realized once, although he has ideals, he spends most of his time busy just trying to stay alive! He dresses well, wears a scarf (commonly used by mice as a disguise) (he also spends a lot of time picking out scarves), and smokes too much (hand-rolled cigarettes). He’s also very imaginative, and used to fancy himself as a cowboy-mouse, but over many years could never find an appropriate hat (that fit).

This mouse wasn’t a Colombian refugee yet, but was fast approaching the airport, having hopped a clackity train, and had a layover in London (an unusual dual-Atlantic route, circuitous to form, but still the quickest way) before he would really consider himself officially one.

He mouse-hopped off the train near the airport and hustled across the asphalt landscape, feeling the golden eyes of a cat the whole time, but not scared; but oddly, as if he had a cat escort.

When he finally boarded the Lufthansa, stowaway-style like a true refugee, he had just enough energy left to climb his little mouse body up to the edge of one of the jetliner’s passenger windows, and as the plane curled a half mile over the village mountainscape that looked so small, he envisioned Esteban burning the country to the ground.

The mouse shed a tiny tear watching his homeland soar into the past, and became determined to do everything he could to stifle Esteban, even if just to annoy him, and even if just to do that from afar.

Esteban, in the meantime, continued to have “The Assassination Dream,” and continued to mention this to his men, who each time would laugh heartily at the prospect the mouse got away. Esteban, in the excitement, one time gave the dream a name and, once named, the dream took on a life of its own!

It would become a universal consciousness!

The dream recurring, Esteban began to find it natural to be suspicious one of his dream-mice escaped. But the little mouse that embodied his struggles would be too tiny for him to squash, even ever even see, except when … well … fast asleep! And then, of course, it wouldn’t matter where in the world any of them were!

Now while it doesn’t put the Colombian airline industry in a good light, it’s actually possible for a mouse, on foot, to navigate all the way across town and get on an airplane in less time than a man who has a very fast car (and much longer legs)!

Nevertheless, and with our mouse already boarded, Esteban did make it through customs to his flight to New York in time. But neither man nor mouse would know both were on the same plane!

During the first leg of the long flight, Esteban felt a little worn out, and as if he could finally take a rest, and dozed off – the inimitable din of a tube of (mostly) humans flying through the sky in a missile, the tingly electronic zing, mixed with insulated motor sounds, and the hush of all the little voices – creating an intoxicating drone.

Although considered an intellectual (and proud of it), he eventually began to question his own mind, when he suspected somehow (and this he would never admit to anyone) there’s a mouse “General” in charge of mice around the world, controlling them and issuing commands – the really crazy part – just to annoy him!

One Reply to “Share The Moon – Episode 2: Esteban Escobar – Chapter 2: The Mouse”