Both “Dreams” and “Gunpowder and Lead” were recorded with the gimbal camera. You can hear less audio compression being forced onto the signal by the camera on this song, just because the song is not as loud. The audio compression on the camera did fairly well, but you can hear it kicking when the music gets loud. This was a great looking club and I had just gotten the camera and was learning how to “fly” it – see “Gunpowder and Lead” for a slightly deeper color saturation (post production) as well as some flying, and the interior with three disco balls. The camera did concert-style lighting surprisingly well, but the bokeh is not very good.

The camera is amazing at flying and reacting immediately when taken off axis. It’s also easy to do basic operations, even in the dark and WITHOUT a smart phone, on its own small touch screen. The image on the touch screen is impressively clear and bright if you have good vision. I needed my readers, but then I was very happy using just the tiny screen on the handheld camera. The camera will resist being bumped or shaken. It’s extremely fun and satisfying in an environment like this. 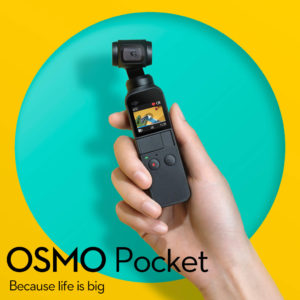 This technology is far superior to what it could replace – expensive counterbalance devices that handle heavier cameras, and more importantly, image stabilization of the kind found in professional camcorders. While the Canon XA-30, for example, has the best image stabilization built-into it I’ve ever used (see this which was shot with the XA30 on a tripod I was holding by its feet on a crowded dance floor. Until the Osmo, I was very impressed with how smooth it was under the circumstances.), this is a completely new way of dealing with image stabilization. If you understand only one thing about the Osmo, while it’s great at flying and doing super cool motion video, what’s most important is what’s invisible: it’s steady as a rock.

I used the video “Dreams” to demonstrate lighting and audio and give a general idea. But notice how you don’t notice the most important thing? You’re probably thinking, Mark, why don’t you move around a little? Let me tell you, when you don’t have to ever carry a tripod to a show like this, and you can get ROCK STEADY results like this, at any height you want, you’ll appreciate what’s happening. This thing is like it has a gyroscope built into it. It will NOT move. The top two corners will stay horizontal. It’s like a miracle; you don’t have to do anything! Move your wrist and it doesn’t matter; swing it up, down, hit it by accident, it doesn’t matter. It’s like having a magic tripod that will not ever bump unless you hit it really convincingly. The greatest thing about the Osmo is it’s innovative way to not help with stability, but absolutely ensure it.

The tiny microphone on the camera is all that was used for this recording. We were not at ear-bending decibels, and if we were, this little camera would have started to audibly compress the sound … but nevertheless, if you don’t have a better audio recorder solution, no matter what, you will have audio from the little built-in mic, and if it’s under, say, 100 decibels in the room, you’ll get sound like you hear on this (Dreams). Not too bad!

It’s super-easy to accidentally cover that microphone (it’s just a tiny hole) with your finger if you’re holding the camera, so be careful with that. There’s no support for outboard microphones, but hey, this thing is the size of a hot dog. 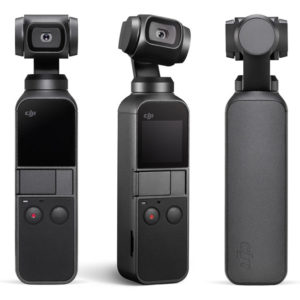 The base of the Osmo is flat enough to put it down. When you do, the gimbal acts so flawlessly there’s no “bump” or jerk AT ALL if you just move with your hands smoothly. Then you can just fly away. I’m really impressed with the way it looks when the camera is moved in the mid-air, as opposed to a standard pan. Still, when you have the camera on a tabletop, you can manipulate pan and tilt VERY smooth and slow with the thumb wheel, so it can easily look like you have a tripod and smooth pan head when you view the video!

And you can put it in your pocket! You can carry it anywhere! I have the add-on toggle wheel that attaches to the front of the camera, and it’s absolutely essential to using this camera. With it, and with some skill, the possibilities are really amazing. You will feel like you’re amazed immediately, and also see a clear path to finding it even more amazing the more you use it and get used to moving through the air while slowly panning with the thumb wheel. When you review the video on your computer, you’ll learn even more, particularly about how great it looks when your air-motion movement (it is SO COOL) is done at a fairly precise, fairly slow, speed.

Get one of these if you’re on the fence! It’s a very cool device!

One Reply to “Review of the DJI Pocket Gimbal Camera”