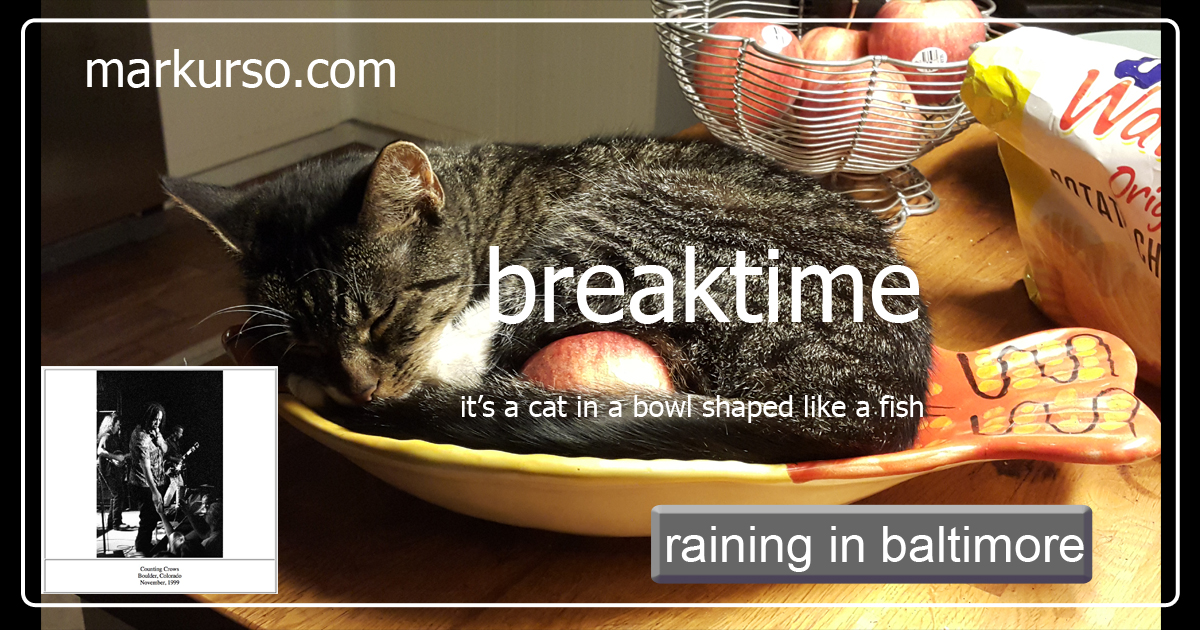 A beautiful song about breaking up, feeling small, and having a vivid imagination! On just another Wednesday night at my place!

This is a personal achievement for me; a few years ago, I couldn’t have pulled this off! It’s also a personal favorite of mine! Brandon had only heard the song a few times before this! Video and Lyrics, and a nice article as well, below!

I believe the guitar is a lifelong world full of growing and learning, but you have to contain it; you have to first adhere to a few containers, which could feel like restrictions, the “containers of music” …

The simple, common “rules” of music, like timing, rhythm and layering, is “technical” knowledge that’s needed, otherwise playing guitar becomes boring, and it will feel impossible to “get better” at it. What’s needed is, to play within the rhythm, understand counting, and understand that both singing and rhythm guitar are rhythm instruments, just as much as any other, when used correctly. Playing within rhythm, and layering, are simple things to understand, and critical and vastly important, because of what the human mind expects to hear, and because improvising, which can support uniqueness and personality, would never make sense unless there’s a “container” which we leave for a moment, then return back to – and the song suddenly sounds like it “tightened up!” Improvisation and creative, personal playing, needs to first be super-simple, following all the “rules,” then it can vary, and the variance means something!

Notice in this song, how Duritz keeps the chord progression simple, but at the same time unusual. It’s a 3/4 beat, and the key is Dm, which gives the song dreaminess and jazziness. The chorus is only two chords. And throughout, the lyric wraps differently than you might expect, everywhere … this is Duritz’s signature – almost as if he wrote the simple melody to create a super-predictable mood, then purposefully misaligned all the lyrics, but forcing certain words to fall on the “C” chord, which, in the context of Dm, is a very “pure” sounding chord. It’s very creative!

The hardest part of “doing” this song, is hitting the rhythm. If I didn’t pay strict attention to that, because the layering is very much intentional, the song would quickly fall apart, and sound “all wrong.” Hitting the beat matters.

This is two Sennheiser e835 microphones, one for vocals, and the other mic-ing the Vox guitar amp, into multitrack. The “Reaper” DAW is open with two armed mic tracks, which are enabled for output to the room monitors. I simultaneously have a stereo Rode Videomic X mounted on the video camera, and that stereo track is the third mixdown track I put in the DAW … then I mixed the three tracks, one vocal, one guitar, one on-camera.

It’s a great room, and the on-camera sound is remarkably good. When recording, I use a Mackie Big Knob Studio Plus, to send audio to either/both a pair of Yamaha studio monitors and pair of QSC 10.2 PA monitors, and with audio set to 96Khz, using a Mac Pro desktop, I have near-zero latency. The monitors are not behind the performers, but instead I have them on the other side of the room, and when you’re singing, you can hear the mix amazingly well, and easily. I’ll mic the drums next, but this was a great 3-track matrix project! The setup allows for simultaneous performance mixing and recording, and video recording, and DAW mixing of the audio separately from the video.

I use Quicktime 7 to extract and replace the audio. 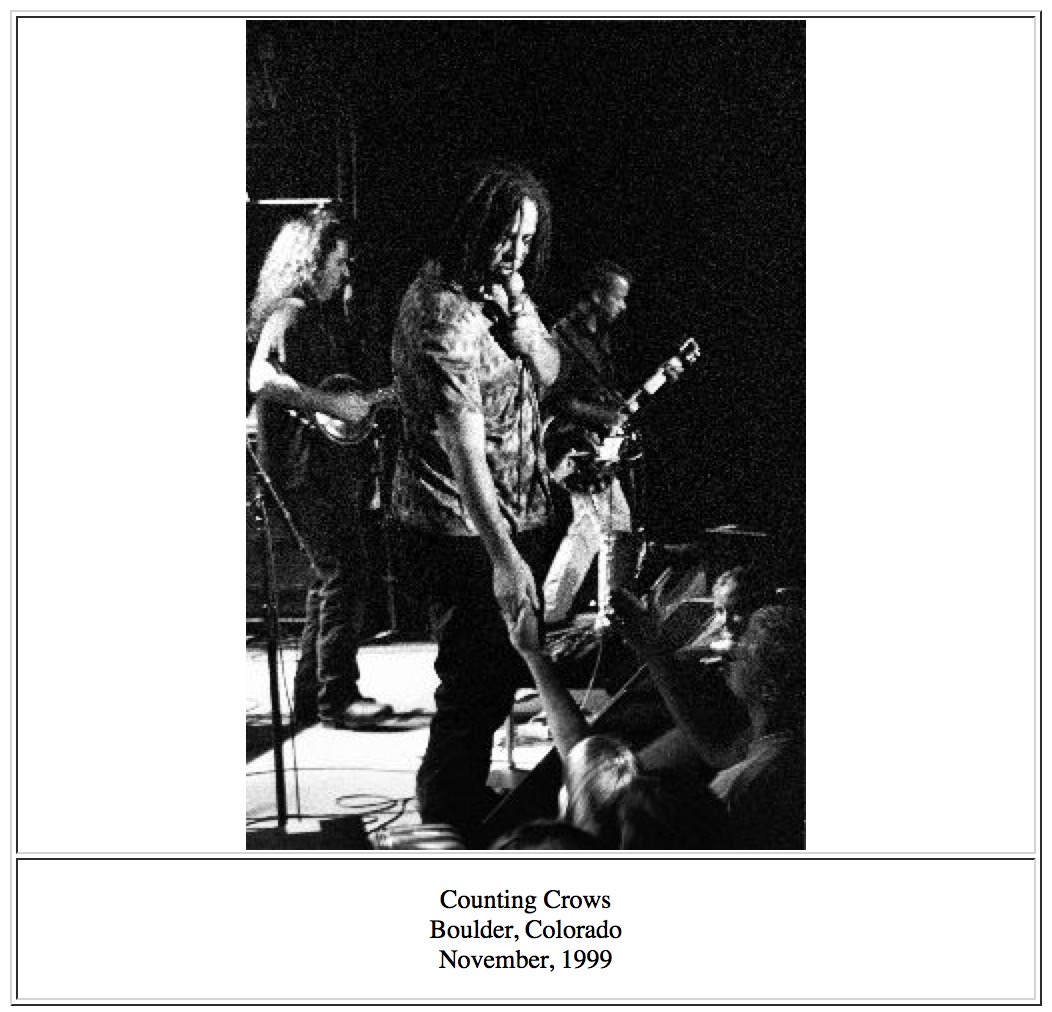 I met Adam Duritz once! He’d never remember, I don’t think. It was in 1999, in Boulder. I snuck my enormous Nikon camera and lenses into the Boulder theater, attending as a radio station program director. I got great shots of Counting Crows, then said “hi” to Adam on the way out!

Here’s me and Brandon … 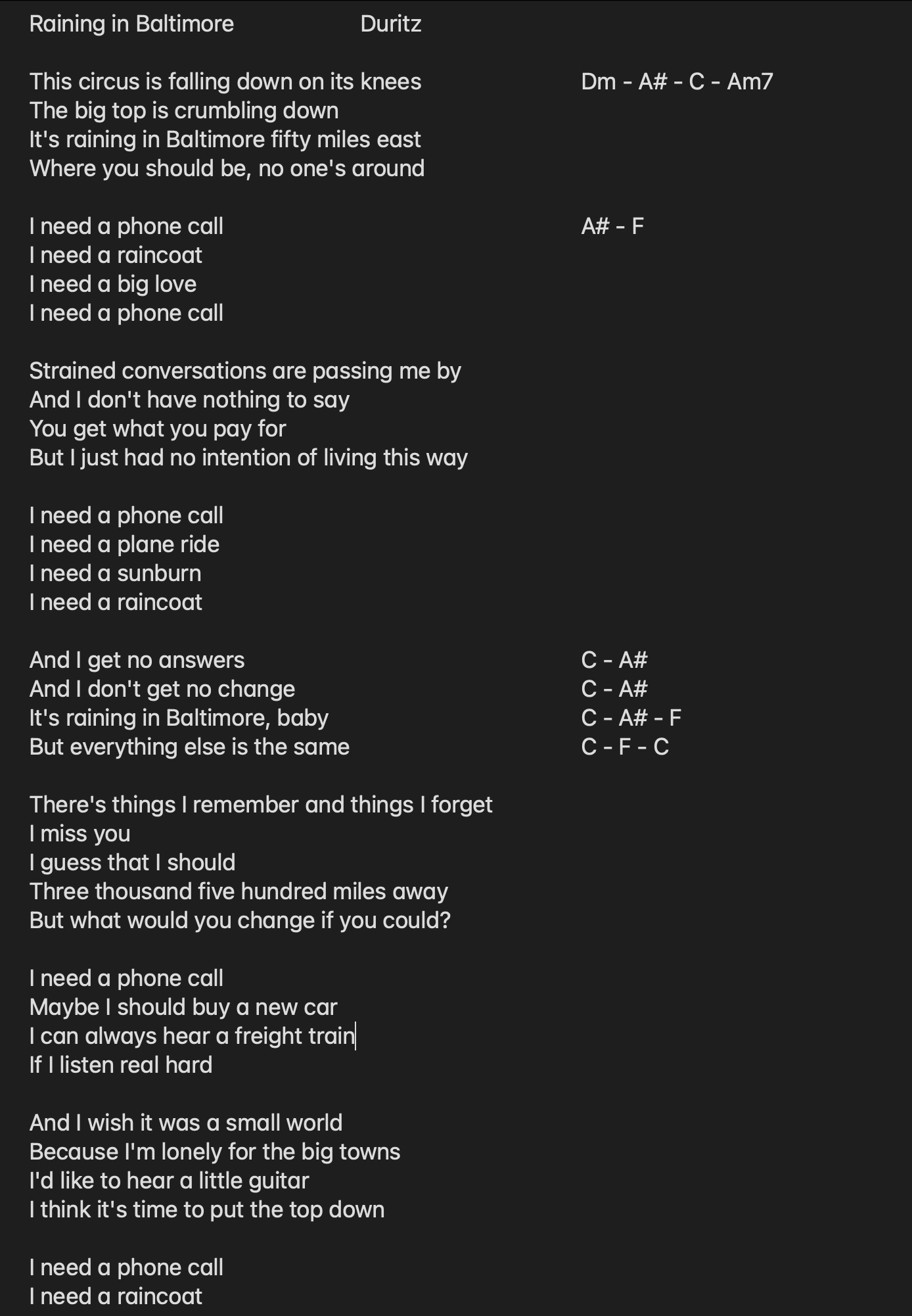 The circus is falling down on its knees
The big top is crumbling down
It’s raining in Baltimore fifty miles east
Where you should be, no one’s around

And I get no answers
And I don’t get no change
It’s raining in Baltimore, baby!
But everything else is the same

There’s things I remember, and things I forget
I miss you – I guess that I should …
Three thousand five hundred miles away!
But what would you change if you could?

I need a phone call
Maybe I should buy a new car
I can always hear a freight train
If I listen real hard!

And I wish it was a small world!
Because I’m lonely for the big towns
I’d like to hear a little guitar
I think it’s time to put the top down!

I need a phone call
I need a raincoat