I’m tired of reminding everyone black holes exist only in the imagination, so I’ll make this the last time. This report, on the Harvard web server for Chandra press, talks in detail with a few statistics about these supermassive black figments of Einstein’s imagination, but, as usual, as if it’s all fact.

There’s not a lot of guts to the release; it’s more like a long caption to the photo, and the photo (below) isn’t anything you’d hang on the wall.

But the comments are interesting. “Decota” was concerned the black holes might be traveling toward us, to consume Earth. Hopefully not before she makes it to the grocery store to pick up some eggs, I thought. I wanted to call her up and tell her it’s going to be okay. Duane posted a question about gravitational lensing, which concerned him, as it should, so we can imagine these things with some consistency, at least. Drago commented on the great influence the imaginary black hole has on the Universe. It’s hard to argue with that. There were only four comments, and the last one, from Tom, seemed unnecessarily confusing, about variations in x-ray luminosity, as if he was trying to ruin all the fun, like the black hole fact police. 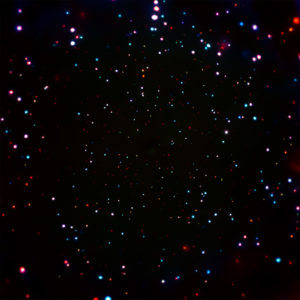 A quick reminder, science friends, if you’re going to leave Chandra a comment, you can’t be (or use) a robot; there’s a “captcha” widget to stop you, but you can be a follower; any and all enthusiasm is strongly encouraged. I hear they’re going to make a movie about this, too, but so far don’t have enough convincing footage.

Now I don’t know what the dots of light in the photo are. It’s an x-ray image, so they’re invisible things. Some people are sure they’re black holes, but I’m not convinced. The release tells us “gas falling towards these black holes becomes much hotter as it approaches the event horizon, or point of no return, producing bright X-ray emission.” 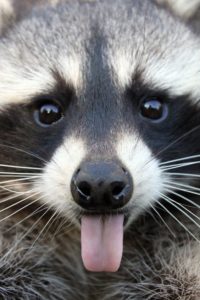 It’s like saying there’s a raccoon in my attic, although all I really know is I heard something up there moving around; but even better, the raccoon may have existed in the attic as long as 12 billion years-ago, and what I’m hearing, that I suspect might be a raccoon, I can only hear with my special billion-dollar headphone set that listens into the past. Or at least I think it does; that’s what they told me.

Is this science, or Scientology?

There are experts publishing papers on black hole growth, who this, and more future study, even deeper into the Universe, will benefit. Once they gather enough data, these scientific authors hope to be able to determine the specific category their research belongs in … fact or fiction.

In the meantime, I’m going to keep looking for, as Tom suggests, “insight into processes behind growth dynamics during the observed period in the universe’s history,” and hopefully, finally, begin to understand my growing invisible raccoon problem.

Then it’s off to the store!