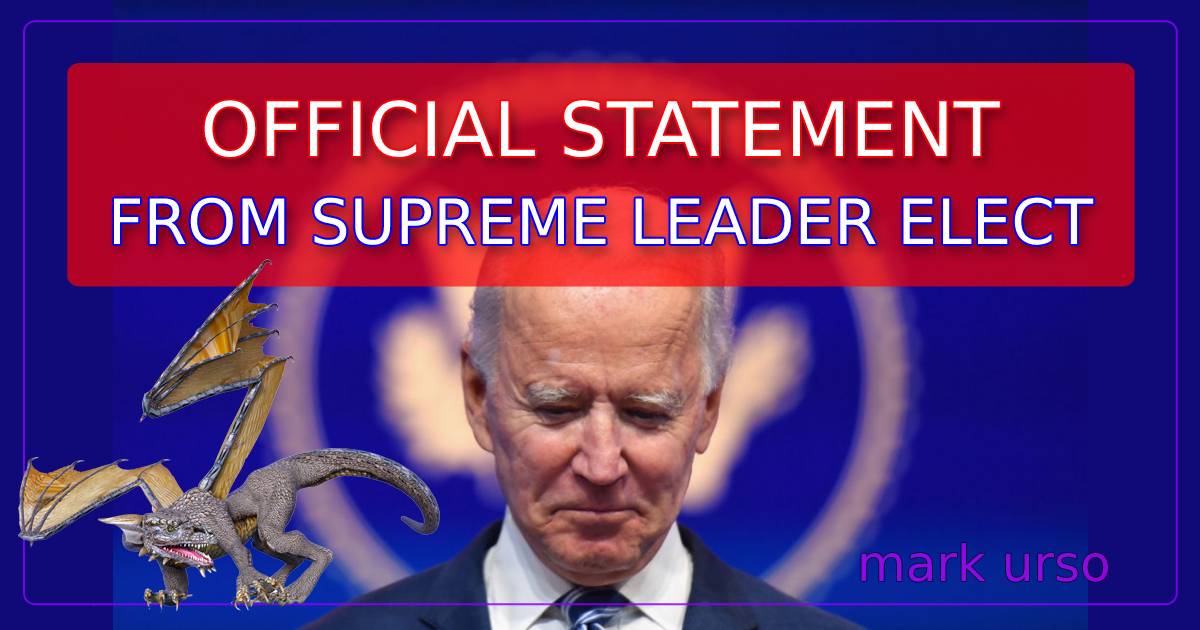 I’m Supreme Leader Elect of the whole Universe. If you didn’t vote for me, shame on you.

As I prepare for my transition to Supreme Leader, I’ve been making lists of everyone who wasn’t nice to me when I was campaigning. We’ll be having a picnic outside Alexandria Cortez’s house in December, so we can learn from the best; it’ll be a bar-b-poop roast; I want to set it up in her driveway because it’s a public place. Everyone should bring a bag of poop, preferably certified by your Sheriff’s office, but nobody’s going to check it out at this point. No masks are required, either, but you still might want to cover your nose.

As Supreme Leader Elect, I am setting up a task force focused entirely on buying guitars. Another will create a band. Since Diana Ross and the Supremes are all still alive, my only choice will be to call the band the “Supremes” anyway, because I can do whatever I want. I’ll also set up a third task force, which will be permanent, charged with making lists. First they’ll start with a song list, then other stuff too.

Thank you for electing me. I almost forgot about that!

That’s a start, anyway. I do love making lists!

.@AOC & @DNC targeting @realDonaldTrump supporters including Blacks to put us on a list holding us “accountable” after the election. I wanna be first on your list. Liberal democrats wanna track down Black independents and whip us for stepping out of line! Its #HiTechLynching! pic.twitter.com/le6Fxjz775

Recently, I saw on Twitter that AOC wants a list of Trump supporters, and so does Antifa. What will they do with it? They will cancel and harass conservatives. Read more here! https://t.co/YEfONPRzTX

By the way, how much would you pay for a ticket to an Andy Cuomo / Donald Trump cage wrestling event?

Oh, and before I go take a nap, let me add to the list of lists, making a list of people prohibited from doing things, that’s a good idea. That way, if they’re wondering why they’re not allowed to do something, we can just show them the list. Note to self: Philadelphia.

And get that big map with Supreme Leader victories framed!

This will be a smooth transition!

This too: Whoopi Goldberg – people like her, she knows everything, perfect.

By the way, even if you didn’t vote for me, I still think you’re okay. There’s no need to register for citizenship or any of that nonsense; it’s the whole universe, so you’re in. Don’t worry. No voter ID, eligibility checks, don’t worry, I’ll take care of everything for you.

I don’t like looting. Loot your own stuff but stay away from mine.

Also, I’m changing the Internet, but it won’t be anything you’ll ever notice.

I promise you, my faithful servants, a universe without violence, looting, pillaging, burning buildings and killing of innocent people. I’ve already started negotiating with interplanetary leaders to create a more equitable thug spread (ETS), to even-out distribution of thugs throughout the universe. They all ended up in Seattle somehow.

And I command anyone who opposes me or challenges my authority to stop! I won! Please concede. And if you don’t, well, I don’t know what I’m gonna do. Everybody says I won anyway.

It’s trickery. They’re trying to insult your intelligence. Don’t listen to them.