The economic forecast for the computer cloud industry calls for rain. Except over the Dropbox application, where it will continue to be sunny and pleasant! 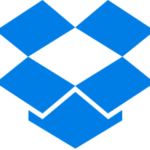 Today’s blog is about Dropbox, a retail application that shines in a very cloudy space in the world of the Internet.

Many people probably don’t know why Dropbox is the winning application to solve hard drive and syncing needs for more users than … (I don’t actually know this, but you can look it up if you want; this is a “do your own research” piece).

If you’re a techie, you know. If you’re a stock analyst, maybe not. That’s like a doctor not knowing why his patient is so healthy!

It’s simple. But you have to do one thing that the Dropbox people don’t require you to do, and which many people don’t do … to experience the invisibly near-perfect app Dropbox really is.

You have to install the software on your computer!

In my many years as a Dropboxer, I’ve used the system on both Macs and PCs and it’s really seamless when you install it. The idea is, Dropbox being an intermediary place to store files, and triangle point for syncing devices, it’s an Internet application, and as such the peeps who design it give you a way to use it in its baseness by just having an Internet browser and going to the site. In all fairness, using Dropbox this way is impressively confusing and cumbersome. Buttons you need, like “download,” always seem nowhere to be found, until you more and more quickly feel like giving up each time you try.

Once, though, you install Dropbox, no longer opening Firefox or Safari (web browsers) to use it that way … something happens that could be considered a computer miracle. The “app” you just installed completely disappears, integrates invisibly, and everything you want to do you already know how to do.

The “app” isn’t really an app with a dashboard, although there’s a place where you can adjust settings. What happens when you install Dropbox is, a “dropbox” folder is created on your computer, and then magic beans start dancing in a pleasing way. It’s remarkable.

At this point, in order for the beans to get their orders from somewhere in Mexico I think, you need to be connected to the Internet. So then, nothing. Don’t do anything.

I am so pleased, as a customer, I’ve forgotten I was previously scratching my head using the web interface.

You simply have to install the app. The ONLY confusing thing about installing the app, is nothing really seems to get installed, and it’s a little too easy to “not find” the instructions on how to use the app … by doing nothing!

This is revolutionary stuff. The “Nothing” staff is elated, and we’re even planning a party for the Dropbox people, you know, ice cream for everybody! And the most exciting part is, and we love this part, none of that is really going to happen!

I love my job.