Just Another Attempt at Free Speech

I’ll get to the point;
Monday was just another day in the news, with lies about Joe, support for Trump and strangely-defensive sexual ambiguity.

The New Curriculum –
Boys are Girls and, Well, Whatever!

In the news today is a young man who believes a man is a man and a woman is a woman. This is clearly trouble, and before he could spread his sinful message that violates all science, medicine and common reasonableness, the State University of New York (SUNY) took it into their hands to put a stop to things, disciplining him with suspension.

So, things are a LOT safer now on that campus.

“A man is a man, a woman is a woman. A man is not a woman and a woman is not a man,” Owen Stevens said in his Instagram video that caught the attention of the university, according to the site “themix.net.” The Dean of Education at SUNY Geneseo said the college student’s videos “call into question” and doubt that he can “maintain a classroom environment protecting the mental and emotional well-being of all of [his] students,” the article states.

The Daily Wire reported the student is balking: According to a copy of Stevens’ suspension, the education student will remain suspended from participating in in-school field experiences and courses that have field experiences until he completes a “remediation plan.” The remediation plan includes taking down his Instagram videos and attending school-sanctioned training.

Stevens told The Daily Wire he refuses to take part in the training.

So, the untruthful becomes, as is inevitable, a bunch of convoluted lies that sound like … a bunch of crap some mentally unstable demon might spout, but still posing as reality, thanks to an education center where this student was under the impression he was receiving an education for his dollar. SUNY thinks, no. He got an F in virtue posing, so must take a different curriculum.

Are you ready for the new curriculum? I’m not on board. I’m still chewing gum and sticking it under my desk and pulling Paula’s hair in 7th grade. And I’m 58, well beyond the window of salvation.

Owen’s okay with me!

The Daily Wire says Stevens told them he’s received threats from his peers since his videos were uncovered. “I’ve received threats and horrible incidents of students who all feel like they are making the world a better place by becoming the woke thought police,” Stevens said. “Overall, I want justice and the right thing to be done.”

But the school, not so much.

Could a school be more of an asshole than to publish this! L@@K!

“Although we cannot comment on any particular student, SUNY Geneseo respects every student’s right to freedom of speech and expression,” a spokeswoman said. “By choosing to enter into certain professional fields, students agree to abide by the professional standards of their chosen field. At times, these professional standards dictate that students act and behave in certain ways that may differ from their personal predilections.”

That is the ultimate of hypocrisy for a school to say, a school which took this young man’s money under the pretense he would be educated. What happened? Does he get his money back?

Should these educators be viewed as the minions of Satan, spewing lies and ignorance, backed up by tortuously incorrect logic, and at someone else’s expense, or are they modern professionals to be emulated by the wise, because they understand the intricacies of being expert purveyors of knowledge, able to “act and behave in certain ways that may differ from their personal predilections?”

The story from SUNY was brought to my attention on Quora. Thanks to writer Yara Priest, a self-described anti-feminist and medical student!

In Other News, CPAC

In a follow up to the successful Conservative Political Action Conference (CPAC) this past weekend in Orlando, here’s a video featuring former Secretary of State Mike Pompeo criticizing the Biden Administration.

And a lovely tweet from “Always Right!” (not left) … 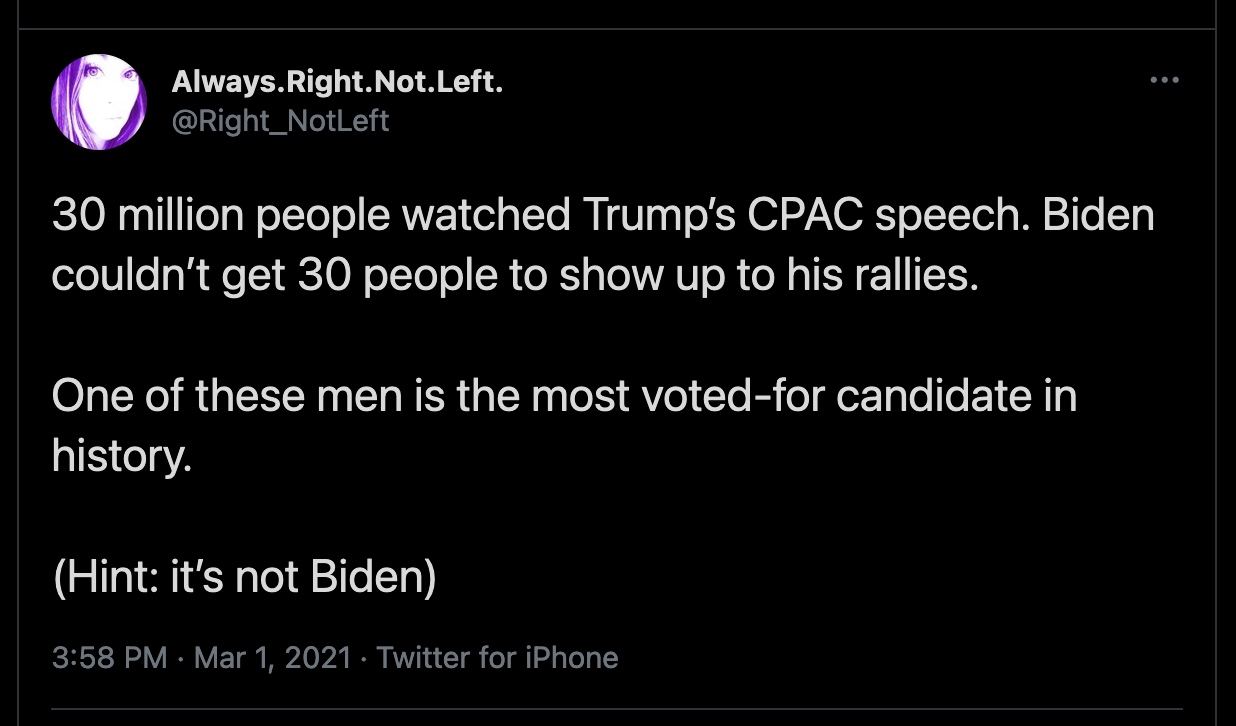 And … Just Another Insurrection

This time it’s in Georgia, and boy, does it look dangerous. The headline on 11Alive reads “House members threatened with arrest at Georgia State Capitol protest,” and it’s all about election fraud! In this case, the Democrats are protesting in favor of a little bit of fraud. They hate signatures and any means to tie an actual legitimate vote to an actual living, legitimate voter!

The video is not for the faint of heart.

So in the irony of this still-young year, “protesters could be heard chanting, “stop voter suppression!” Which is, in this reporter’s opinion, like saying stop criminalizing criminals. But that’s just me. I’m a lost cause at this point.

Keep up with all the news here on my site. I can’t promise it will be believable or even vaguely human … but I’ll do my best to make sure it’s partly true.