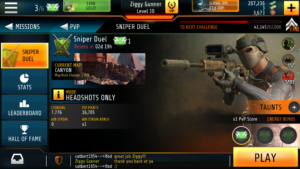 Kill Shot Bravo is one of the great games that turns your smartphone into an amazing handheld game console. Periodically I’ll blog about KSB; if you have never ventured into the games you can play on your phone, I encourage you to check some out. This one is very graphic and would be best if you love guns and shooting, the armed forces and extremely high quality graphics.

I Keep Getting Killed!

Sniper Duel is one of the most challenging events in Kill Shot Bravo (KSB). Just now I hit my opponent four times in succession using a semi-automatic HH Founder’s Rifle, to get the win. The trick to getting anywhere in the Sniper Duel is having a great gun, and it should be a semi-automatic, which are a challenge just to get.

I’ll outline the basics for this event and get you started, get you winning, and hopefully have good info even if you’re an expert. This article is just about the “Sniper Duel” portion of KSB.

Can I Just Skip This Part?

Sniper Duel is the only way to rank up. 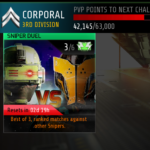 KSB is an armed forces shoot-em-up game with super graphics. You earn money and buy gear, including guns, then get involved in different sorts of matchups, assaults and escapes. Each event is unique and has different tips and tricks. KSB is not like many games in the sense that you don’t keep track by a “winning percentage” (a la Golf Clash or other score-based games) – the Sniper Duel is a good example of “ranking up” as opposed to “scoring consistently.” The game forgives you, even encourages you to do more sniper duels when you lose; it does not take points away.

In fact, you can just lose one match after another and you’ll keep getting a small number of “points” that help you advance. If you win, you get many more points and advance faster. So don’t stay away just because it feels pretty terrible to get hit over and over again, to keep losing, to get hit at the exact instant you find your opponent in your scope! It’s tough, ‘cause it feels like you are mismatched. Sometimes it feels impossible.

But playing the sniper duels is the only way to rank up from Private to Corporal to Sergeant and so on. You’ll be a Private forever if you don’t do it. And remember, you will slowly move forward in the upranking process even when you are getting hit repeatedly. But, of course, you want to do better than that!

How To Win At Sniper Duel in KSB

The way to win in sniper duel is fourfold:

2) Play the Daily Gauntlet every day if you can.

First, play the sniper duel and lose – get killed. It’s the only way to figure out how it works. Practice. Watch the scope very carefully, because a small arrow shows up when you zoom in, and shows you which way to move. How far-in you zoom makes a big difference. The farther-in, the better you can see everything, but it takes too long to adjust position; it’s like you’re blind to everything around you; so finding your opponent (who is tiny and camoflauged) becomes difficult. Zoom too far-out and you won’t see the tiny figure who is going to kill you in a second.

Play a Little Every Day!

Second, play the Daily Gauntlet every day. It’s free. It’s excellent practice. They give you great rewards. The opponents are generally defeatable.

Get A Semi-Automatic Sniper Rifle

Third, and by far the most important thing, upgrade your sniper rifle if you haven’t already. You want a semi-automatic model. This is not easily available – I got one from one of the crates (pure luck) and didn’t have to pay anything for it. I’m shooting an HH Founder’s Rifle, one of the best semi’s available. When you have a semi-auto, you won’t necessarily win more, but if the other guy doesn’t have a semi-auto and he has to reload, you have enough time to get multiple shots in during his reload – you can actually watch him pull his gun up and reload if you have him in your sights.

You should upgrade your gun this way: First, get the best semi-auto you can. Do not spend much upgrading a non-semi. I don’t recommend paying real money but that would be one way to get one. Keep playing the daily gauntlet and you may be gifted a great gun as I was. But get a semi-automatic or you won’t be able to compete. Then upgrade the gun – first the sights and then the thermal; both are very important – max them out.

Upgrade the Thermal for Your Sniper Rifle

When in a duel, your thermal will run out if you don’t upgrade it – this will almost certainly end badly. If you have not yet upgraded your thermal, play this way: just turn it on, find the opponent, then turn it off really quickly and shoot. You can imagine, this is a little dangerous, as half the time you’ll get hit because of the extra second it takes. But otherwise you probably won’t have any thermal left for matches two or three.

Upgrade the Scope for Your Sniper Rifle

Upgrade your scope (max zoom). If you don’t you simply won’t be able to find anything. Max it out, then learn how to smoothly adjust zoom power while in a scenario – you have to do it quickly and accurately – when you have a big maximum zoom level you’ll want to operate at partial zoom most of the time, depending on the scene. This is true for all kinds of guns and all kinds of scenes. When you need to sweep, you can’t be fully zoomed-in.

Fourth is trying to hide. You can make yourself harder to find, and it makes a difference. Go to “Gear” and shop around – some of the things can be purchased with medals, which can be gotten pretty easily. When shopping, turn on “thermal” and look at the gear, whether it’s pants or a helmet or whatever else – everything you wear, including your sunglasses, will help you hide, and some of the items will show up darker when the “thermal” button is toggled on. That’s what you want.

The most important thing about the Sniper Duel event is to pay close attention at the very beginning, at the small arrow you’ll see in your scope. If you miss it you’ve got a problem! Even if you have a low end rifle, just play a few of these every day. They won’t use any of your power-ups and you’ll have lives to use up each day; it won’t cost you anything. Upgrade your gun the best you can and slowly but surely you’ll progress up the ranks!

When you get a good head shot using a good scope, you might actually start enjoying the Sniper Duels! Pretty soon you should also get past the idea that you get killed frequently. Keep in mind even when you get very good at the sniper duels, you’ll still be losing frequently; you just have to get used to it.

Secret Tip of the Day:

In KSB during slow motion animation sequences where the bullet is flying through the air (the “kill shot”), you can put your finger on the screen and slow the animation down, and even rotate it!