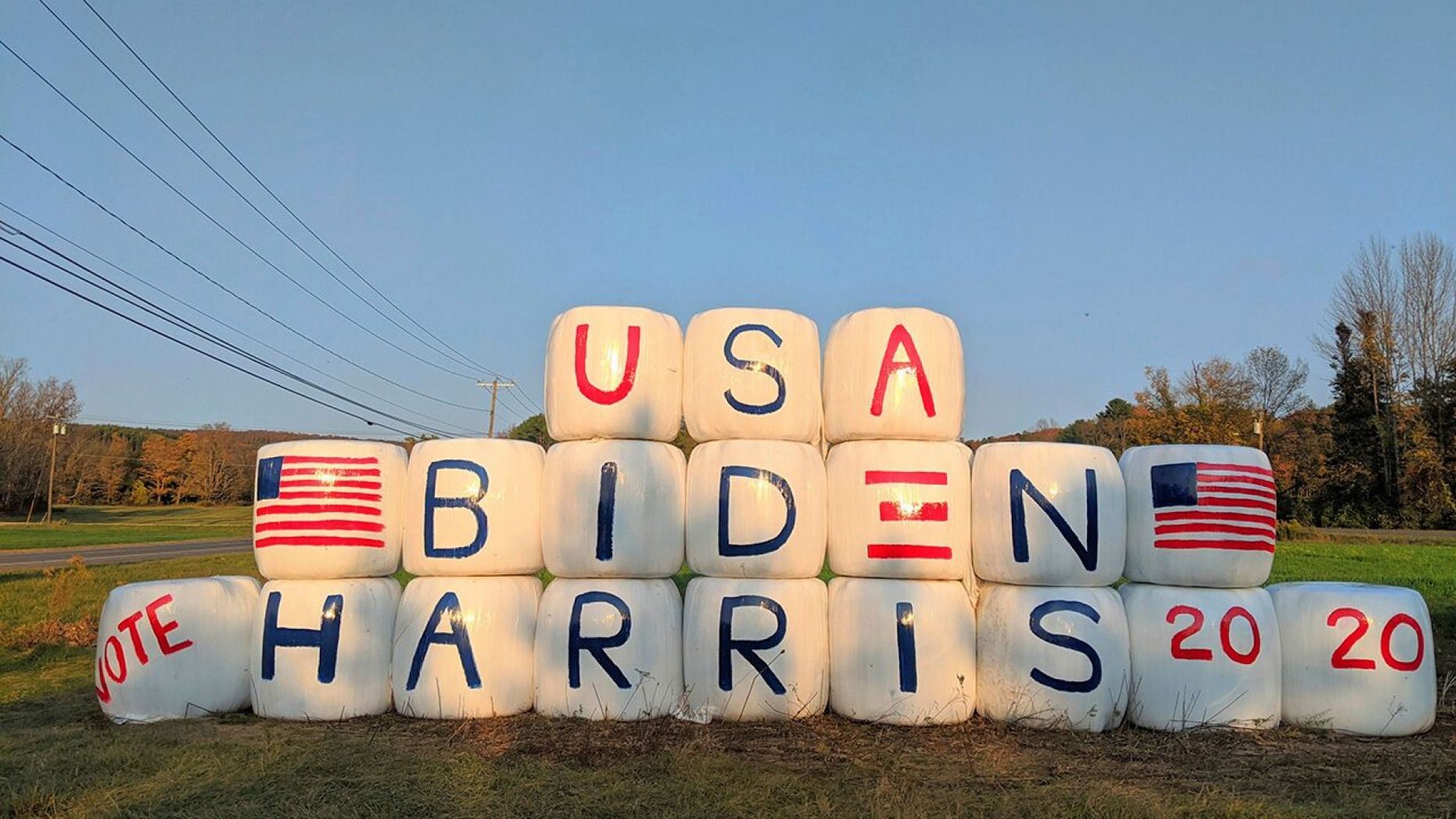 Time for a quick public safety announcement. Just like masks, this is for YOUR OWN good. If you’re smart, you’ll follow my advice.

I have to be honest; it’s not just the fire that’s dangerous, it’s people who aren’t careful with fire. Everybody knows it can be dangerous.

See these marshmallows? Well, marshmallows, even in a field all day soaking in the hot sun, are not very flammable. In fact, they’re often used at campfires for snacks, and no-one can get one to burn well.

But (you youngsters especially), if you make super-giant marshmallows out of bales of hay, then use them as a political sign, it might burn. In this case, it took a very irresponsible member of the community, who didn’t like the look of the pile of munchies, who poured some gasoline on the structure.

According to this article, one of the residents said “local residents constructed a sign that would be theft-proof since supporters in the area complained about their own Biden-Harris signs disappearing.”

It’s understandable, and happening across the nation. For example, “KXRM reports a man in Lexington, Kentucky “chained his Trump sign to the ground to avoid theft. Another man boobie-trapped his sign with electrical fence wire.”

Ex-marine Chuck Corry of Colorado Springs put a nail board down to protect his Trump sign. The project, to display a $2 sign, cost him $60 by the time he was done. He also used “rebar, fence posts, plumber’s tape, glue, a dog leash and cables and anchors. It’s also covered in skunk spray and WD-40 in case vandals try to paint over the sign!”

These are apparently partisan fires.

The west coast, Seattle, Portland and other cities, have been especially hard-hit with not only sign-theft, but fires. Groups of hating revolutionaries wearing riot gear have tried to burn down federal buildings, and have left many parts of their cities looking like fire pits, where previously buildings stood.

These gangsters are welcomed by nobody, of course, but they have been burning buildings down all around the country for many months. Liberals and Democrats have been criticized for reacting poorly, as if they haven’t watched the news in six months, with the Democratic candidate for President saying recently, out loud and in public, intending to be heard, on national television “Antifa is an idea, not an organization.” For some reason, candidate Joe Biden didn’t want to acknowledge the existence of all the building fires started by Antifa arsonists. None of the fires were started by “ideas.”

Nancy Pelosi, another Dem big wig (but with real hair), declared to the world the rioting must stop! Now that’s logical … except she waited six months, until many were injured and killed and businesses destroyed forever, before saying it. And she said it the day after someone defecated in her driveway.

Apparently that was an idea that Pelosi didn’t like RIGHT AWAY!

So the protesters let Pelosi’s house remain. They also threatened a liberal (Democrat) mayor, doing a little vandalism, and she immediately called the vandals “terrorists!” Another Democrat mayor moved! They don’t like fires? It’s hard to tell, because they have done nothing to stop them! They just move.

Those Democrats have not clearly denounced fires. Some people believe they DO like fires. So it’s easy to see, some rough-edged but well-intentioned Republican citizen thought maybe he’d try fire, on the marshmallow things. It worked! But the reaction! Wow!

To clarify, what we have so far is … if you burn down a building and threaten to kill people, you won’t be arrested or prosecuted … if you shit on Nancy Pelosi’s driveway, the riots will be redirected to a different location … if someone asks a Democrat if they denounce Antifa, you can safely claim Antifa doesn’t exist … if you’re a college student, you can freely remove Trump signs from private property even when someone’s filming you … and if you live in America, you can say whatever you want, except if it’s in favor of the President.

It’s a little confusing … that’s why I had to line it up.

According to the article, the marshmallow thing was supposed to be vandal-proof. See, the Democrats have NOT been watching the news. Vandals are pretty efficient these days. They can take out a pile of marshmallows EASY.

Nevertheless, resident Dicken Crane told Peter Aitkin from Fox news “We expected there might be some vandalism, but we never expected somebody would douse it with gasoline and set it on fire,” and “It was very worrisome somebody would set those bales on fire, you had to wonder whether he would be willing to set a barn on fire.” 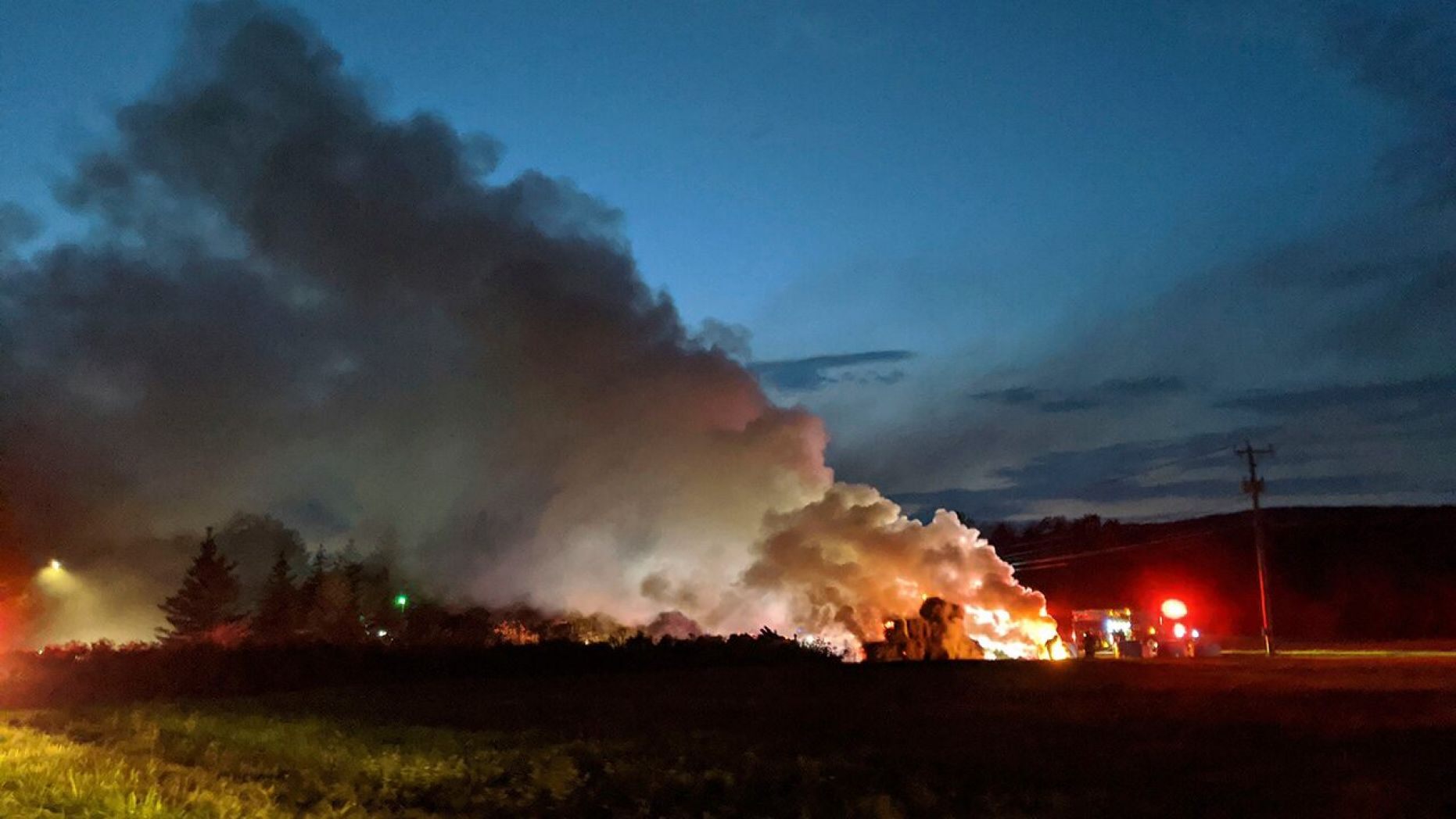 At least the troublesome incident got media coverage. That doesn’t always happen, and the Democratic leaders have across-the-board refused to stop, or even acknowledge the existence of, Antifa, riots, violence and fires.