Gun Control In America and
How To Aim Too Far Left

I’m worried about Terry. I don’t know her, but I’ve heard about her, and I may have even played a role in what I think could become a problem for her! She doesn’t know about it, which is good. For now.

Terry (don’t make fun of her name anymore!) is an outstanding American. She’s concerned about burglars, not at her own home, but at YOUR home. She’s SO thoughtful, she’s not even concerned about YOU, in the event of a burglary, but she just wants to make sure the burglars are not hurt.

So she’s super nice, and virtuous.

She Probably Bumped Her Head
or Something

She deserves to have her name poked away at; it’s the least we can do! Here’s some possibly true stuff circling around the web: 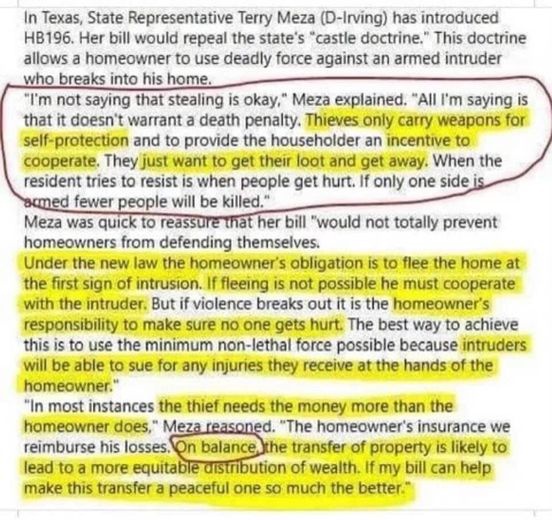 I have to admit, part of the quotes from Meza, above, may be made up! But how are we, really, to know? And, according to the Associated Press, who delved deeply into debunking … yes, part is made up, but part is real, too! In a story headlined-to-misdirect “Posts distort Texas bill on deadly force,” the AP admits “Meza’s bill would amend the Texas penal code to assign people a duty to retreat from an intruder on their property if possible before using deadly force.” If you read the whole thing, you’ll get a lesson in dancing.

That, for me, is enough!

If there were an incident, instead of protecting myself, in Texas, I’d have to exhaust all possible ways I could flee, taking more time, increasing my odds of getting hurt and including methods of escape that might not work, and if I don’t do that first, I’m liable for shooting the intruder. Right, AP? Debunked and all, put through the ringer, it’s still an abhorrent misuse of power by a brain-dead authoritarian, which has now been analyzed by brain-dead debunkers. What the hell? It’s still ridiculous, but the AP reports as if it’s virtuous and the bad guys have caused confusion again! If someone did make up a few of those lines in the viral note, at least they have a decent Republican sense of humor, but they’re not the bad guys.

Another site, Click2Houston, gave Meza and Texas Governor Abbot a chance to clarify things, but again, the conclusion is “what the f*ck?”

Here’s what the first comment under this article says, by someone called “CRWRE”: “Under the new law the homeowner’s obligation is to flee the home at the first sign of intrusion. If fleeing is not possible he must cooperate with the intruder. But if violence breaks out it is the homeowner’s responsibility to make sure no one gets hurt. I hate to be a killjoy Terry but the whole situation could be avoided had the perp not broken into the residence in the first place.”

That was the first comment. I didn’t pick and choose; I only read four.

Here’s the second, from “Timmel”: “Look. What’s the use of a SCOTUS backed 2nd amendment, if you can’t defend your property with a firearm, when confronted and threatened? This piece of legislation is a partisan chip at our RIGHT to own and bear arms. It Must NOT be given over. We aren’t misinterpreting it Terry Meza. We know what you mean. Why don’t you write something more meaningful and more effective, that’s aimed at the Criminals perpetrating the crimes and tempting their fate? You’re wrongly trying to suppress those of us who are intrinsically lawful, making us out as the potential bad guys. Think better. I do not approve of this kind of crap legislation. It’s the wrong track, completely. Frankly, so are you, Terry Meza.”

Third, from “MikeRG”: “Any Government official with this mentality should immediately get a psychiatric evaluation.”

And fourth, from “WalkingDead,” hitting the nail on the head: “A new meaning to social distancing and the 6 foot rule?”

I think we’ve got a trend!

Reading between the lines, Hazy Thresa wants to provide housing to all the new illegal immigrants (millions of them) who will be happily prancing over the border into the US. They’ll need autonomous zones, so to speak.

And, unfortunately, it being 2020, that theory, the weirdest, most far-fetched, anti-human, outright stupidest of all theories … makes by far the most sense.

But I’m still worried for Terry.

What’s she gonna do? When the bad guys show up at her house? She probably has an Obama-era walled campus, but this crazy bat is 71 and sounds like she’d put the burglar in a hot tub and make him soup before he struggled out the door with her valuables. Somebody could get hurt, slipping in the tub.

There have always been dumb people and crazy ones, too, out there. It’s the media who have enabled them to tell the public their most creative ideas under the guise of sounding credible. That’s the weirdest thing. States like California have let thousands of serious criminals out of prisons with the bitterly ridiculous explanation that it’s virus-related, which won’t help when crazy leaders are seen as pushovers and get more criminal votes.

But the most dangerous thing about what’s happening is probably the length of time, with repetition. Mainstream Media is stuck in “Satan-mode,” having sold their souls and abandoned us over the years, and it’s likely the sheep among us will continue to drag along, waiting for their next instructions, thinking they’re being good, wondering just a little about the nonsensical things. The left-swinging mentality has been unleashed, but like an excited puppy, it doesn’t know what to do, has nothing intelligent to say, and will probably pee all over you, expecting you to forgive it because it’s cute.

They can’t be believed, because they’re not yet used to wearing thinking caps. But they definitely bite.

But definitely an alpha 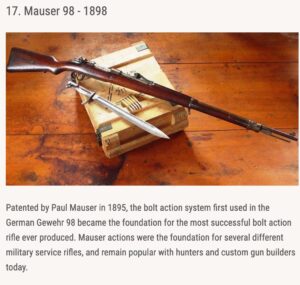 Hope she doesn’t have the last laugh!