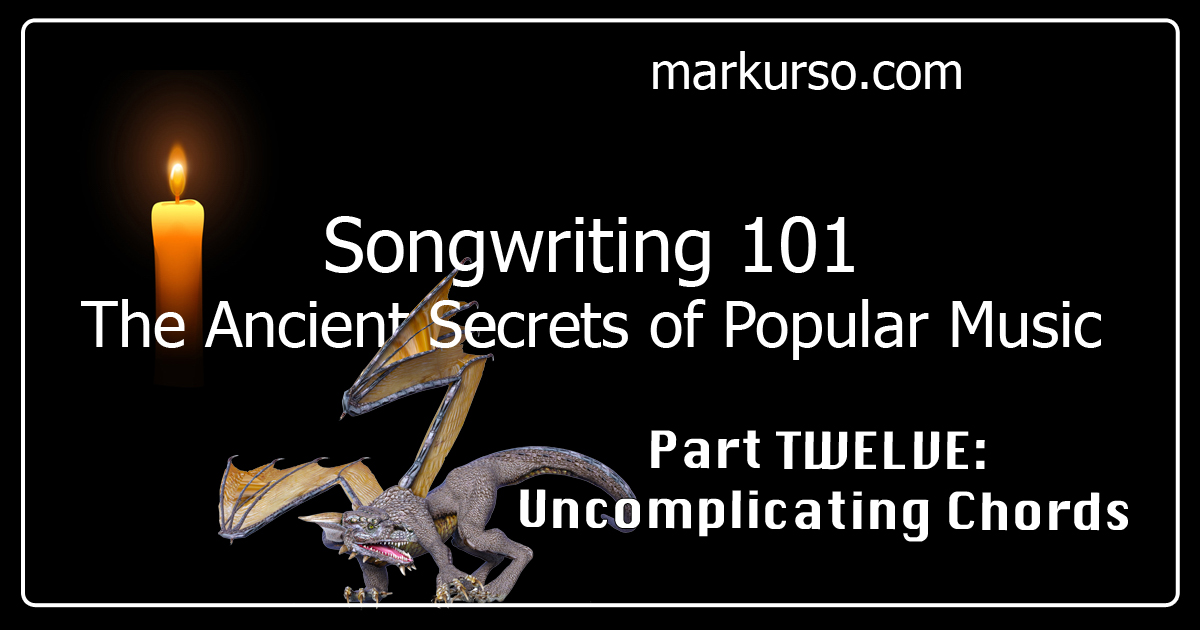 I’ve greatly simplified this without changing any of the chords. This is intended for guitarists and other musicians, so it’s easy to glance at the music and see what you need to see, without any clutter.  I also re-align the word wraps, because the “poetic” pacing, the lyrics written in rhythm, are usually done incorrectly on the popular chord website “Ultimate Guitar,” making it much more difficult a task to play the song.

When I tried to submit chords for the Bob Dylan song “Isis” to Ultimate Guitar’s site, they rejected my submission. The song has three chords, which repeat in a simple pattern. There is no chorus or bridge; it just goes around in circles from beginning to end with those same three chords. Imagine being a guitar player, and having to study the complicated-looking chords shown on Ultimate, with lines wrapped wrong so the pattern doesn’t emerge … only to come to the final conclusion that all you needed was for someone to tell you it’s A, G, D, A. That’s it. That’s the entire song.

I submitted it with all the lyrics, and at the top, the three chords. It all lines up perfectly if you see it, and I was hoping to save people from having to search through the whole (long) song to find they only need to know three chords. But Ultimate requires that you put all the chords in, and try to line them up atop the word they fall onto in the rhythm. It can end up being a real visual mess.

I’ve done this for hundreds of songs (cleaned them up to make them visually work when performing), and will publish them periodically. You will probably, like me, be amazed how patterns emerge. After all, that’s how the song was written; it wasn’t just a complicated hodgepodge, so I always make a 100% effort to find the simple patterns. They should never have been hidden!

This is a good example. Most modern songs, like the one below, have two main parts, a verse and a chorus, which alternate. Sometimes there’s a bridge. In this case, it’s just two chord patterns. You can see, you only need to learn the two patterns, and you’ve learned all the chords in the song. Sometimes an artist will vary a tiny bit or add a chord for transition or suspense, but often a great, million-dollar song, is much simpler than it appears, especially if you use the popular technique of Google searching.

One of the tricks of songwriting is to honor the template; to keep it simple, do exactly what’s expected; write super simple and repetitively as if you want a singalong … and then add a twist. The twists, the tricky parts, the big parts, can’t exist without the underlying simple, repetitive structure. Still, the tricky parts aren’t all that tricky, if you look at the song as simply as possible. When you wrap the lines correctly, you’ll see chord patterns line up on top of each other, and any changes – the changes are the tricks. But you won’t see them (and they’re usually simple) until you find the simple patterns that are being violated. Dropping, doubling, tripling, speeding up are some tricks. One that’s especially clever is using a different melody for the singing than the underlying song. Even more clever, and used often by popular artists, is simply laying the lyrics over the basic chord pattern in an offset way – so the singing line starts late, or one line has way too many words in it, so it has to be sung fast. The incorrect-transcriber (and they abound) will probably wrap the lines wrong. Once you play through it, though, you’ll see how wrapping them correctly makes the whole experience suddenly much easier to understand!

I hope this is helpful. Drop me a comment!

Alfred Bello had a partner and he had a rap for the cops           Am – F
Him and Arthur Dexter Bradley were just out prowlin’ around
He said I saw two men runnin’ out, they looked like middleweights
They jumped into a white car with out of state plates