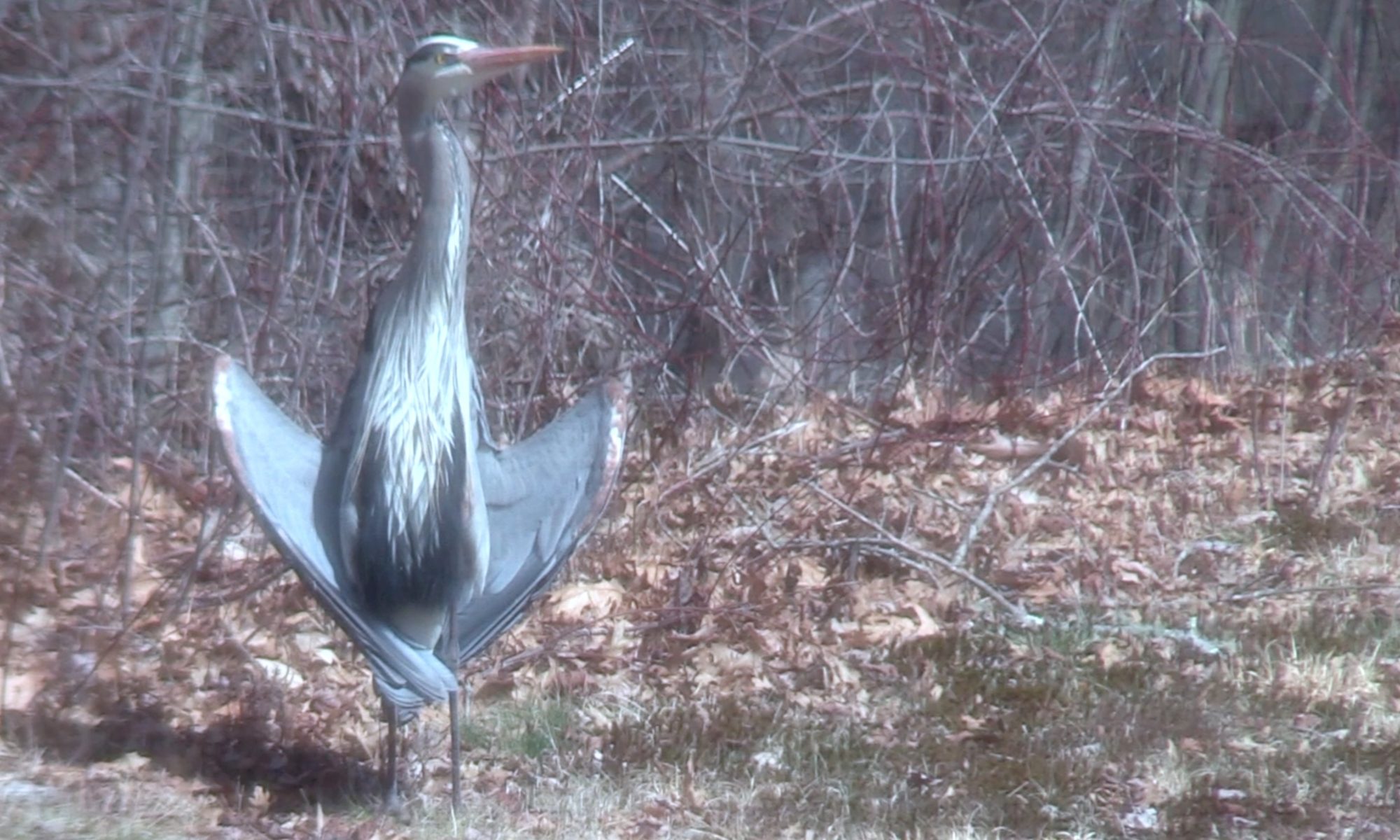 This guy collecting some sunshine this morning in my back yard in Westerly, RI. He’s a Great Blue Heron with ancient folding solar panels!
Canon XA-30 at 100+ feet.

The great blue heron is found throughout most of North America, as far north as Alaska and the southern Canadian provinces in the summer. In winter, the range extends south through Florida, Mexico, and the Caribbean to South America. Birds east of the Rocky Mountains in the northern part of their range are migratory and winter in the coastal areas of the Southern United States, Central America, or northern South America. From the Southern United States southwards, and on the lower Pacific coast, they are year-round residents. However, their hardiness is such that individuals often remain through cold northern winters, as well, so long as fish-bearing waters remain unfrozen (which may be the case only in flowing water such as streams, creeks, and rivers).

The great blue heron can adapt to almost any wetland habitat in its range. It may be found in numbers in fresh and saltwater marshes, mangrove swamps, flooded meadows, lake edges, or shorelines. It is quite adaptable and may be seen in heavily developed areas as long as they hold bodies of fish-bearing water.

Great blue herons rarely venture far from bodies of water, but are occasionally seen flying over upland areas. They usually nest in trees or bushes near water’s edge, often on islands (which minimizes the potential for predation) or partially isolated spots.

The primary food for great blue heron is small fish, though it is also known to opportunistically feed on a wide range of shrimp, crabs, aquatic insects, rodents, and other small mammals, amphibians, reptiles, and birds, especially ducklings. Primary prey is variable based on availability and abundance. In Nova Scotia, 98% of the diet was flounders. In British Columbia, the primary prey species are sticklebacks, gunnels, sculpins, and perch. California herons were found to live mostly on sculpin, bass, perch, flounder, and top smelt. Nonpiscine prey is rarely quantitatively important, though one study in Idaho showed that from 24 to 40% of the diet was made up of voles.

Herons locate their food by sight and usually swallow it whole. They have been known to choke on prey that is too large. It is generally a solitary feeder. Individuals usually forage while standing in water, but also feed in fields or drop from the air, or a perch, into water. Mice are occasionally preyed on in upland areas far from the species’ typical aquatic environments. Occasionally, loose feeding flocks form and may be beneficial since they are able to locate schools of fish more easily.

As large wading birds, great blue herons are capable of feeding in deeper waters, thus are able to harvest from niche areas not open to most other heron species. Typically, the great blue heron feeds in shallow waters, usually less than 20 inches deep, or at the water’s edge during both the night and the day, but especially around dawn and dusk. The most commonly employed hunting technique of the species is wading slowly with its long legs through shallow water and quickly spearing fish or frogs with its long, sharp bill. Although usually ponderous in movements, the great blue heron is adaptable in its fishing methods. Feeding behaviors variably have consisted of standing in one place, probing, pecking, walking at slow speeds, moving quickly, flying short distances and alighting, hovering over water and picking up prey, diving headfirst into the water, alighting on water feet-first, jumping from perches feet-first, and swimming or floating on the surface of the water.

This species usually breeds in colonies, in trees close to lakes or other wetlands. Adults generally return to the colony site after winter from December (in warmer climes such as California and Florida) to March (in cooler areas such as Canada). Usually, colonies include only great blue herons, though sometimes they nest alongside other species of herons. These groups are called a heronry (a more specific term than “rookery”). The size of these colonies may be large, ranging between five and 500 nests per colony, with an average around 160 nests per colony. A heronry is usually relatively close, usually within 2.5 to 3.1 miles, to ideal feeding spots.

Although nests are often reused for many years and herons are socially monogamous within a single breeding season, individuals usually choose new mates each year. Males arrive at colonies first and settle on nests, where they court females; most males choose a different nest each year. Great blue herons build a bulky stick nest. Nests are usually around 20 in across when first constructed, but can grow to more than 47 in in width and 35 in deep with repeated use and additional construction. If the nest is abandoned or destroyed, the female may lay a replacement clutch.

The female lays three to six, pale blue eggs, which can measure from 2.00 to 3.01 in in length and 1.14 to 1.99 in in width, though the smallest eggs in the above sample may have been considered “runt eggs” too small to produce viable young. Egg weights range from 2.2 to 2.8 oz. One brood is raised each year. First broods are laid generally from March to April. Eggs are usually laid at two-day intervals, incubated around 27 days, and hatch asynchronously over a period of several days. Males incubate for about 10.5 hours of each day, while females usually incubate for the remainder of each day and the night, with eggs left without incubation for about 6 minutes of each hour.[

Predators of eggs and nestlings include turkey vultures, common ravens, and American crows. Red-tailed hawks, American black bears, and raccoons are known to take larger nestlings or fledglings, and in the latter predator, many eggs. Adult herons, due to their size, have few natural predators, but a few of the larger avian predators have been known to kill both young and adults, including bald eagles (the only predator known to attack great blue herons at every stage of their lifecycle from in the egg to adulthood), golden eagles, and less frequently, great horned owls and Harris’s hawks.

An occasional adult heron, or more likely, an unsteady fledgling, may be snatched by an American alligator or an American crocodile. Using its considerable size and dagger-like bill, a full-grown heron can be a formidable foe to a predator. In one instance, during an act of attempted predation by a golden eagle, a heron was able to mortally wound the eagle, although it succumbed to injuries sustained in the fight.

Thanks Wikipedia for that information.