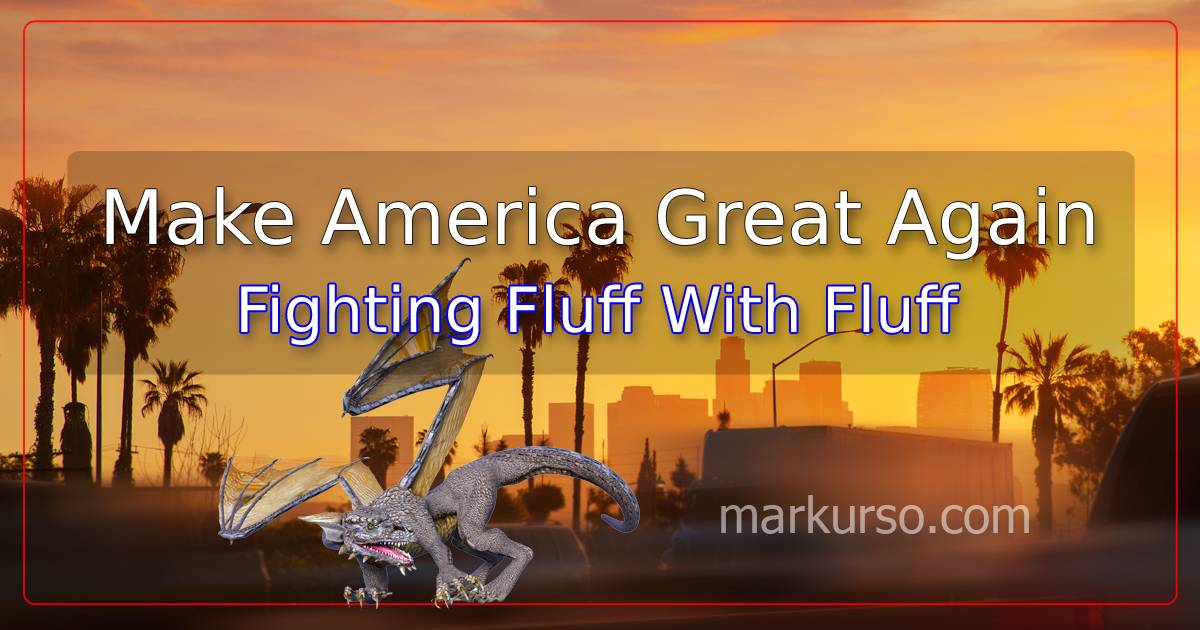 Does it seem unfair to you that the media has been writing scathing, bitter and even sometimes unfair articles (and especially headlines) on the topic of Donald Trump, while ignoring stories and presenting nothing but fluff when it comes to Joe Biden?

Coke is canceling 200 drink brands, according to CNN! Eh … not going to read that one … Oh, here! Google News lists all the important stuff, right? Here on the top – CBS is criticizing Trump for cutting an interview short! Well that makes him look like he’s evading reporters! Cool! Another at the top of the list from the Washington Post’s lavatory cleaning crew, who also write stories at night, telling us “Why Trump’s Endgame is to Rage at Lesley Stahl.” Eh, not going to read that one either, you have to log into this dirty rag and I just washed my hands, besides, who the hell is Lesley Stahl?

I don’t like the Washington Post. It’s mean. The paper is very biased against the President. If you’re interested in what’s wrong with journalism, the Washington Post is the BEST place to start. But they got two of the top headlines on Google News this morning, out of five in the top headlines box. Two others were from CNN, a tough competitor in the race for justice in reporting, using it’s powerful engine room of twisted zombies to flesh out the worst in daily hatred. One says Trump is obsessed with an interview. There are better, more interesting, world-changing, dramatic, surprising, critical angles out there, but the zombies are obsessed with things like calling people obsessed, and Trump, being President of the US, is their target.

The fifth headline comes from Fox, telling us in all fairness about an important story; that Stahl from 60 minutes wasn’t fair in an interview (yes, the obsessed interview, where Trump walked out because the questions were unfair).

Medication prices are lowering. You didn’t hear that, did you?
The stock market is at historic highs. Nothing about that.
Trump’s four Nobel Peace Prize nominations? Old hat.
Joe Biden’s son received 1.5 billion dollars from a Ukrainian company?

Now that last one sounds interesting!

There are stories galore, and better ones than the ones the goons are writing. The news media have been slanting and headlining nothing but fluffy fluff about Joe Biden, to fill in the spaces between hatred and dragging Donald Trump through the mud as far as possible.

It’s almost as if their job is to create chaos.

If you think I’m leaning somewhere, I’m not. Remember, the New York Times this month blasted headlines it was proud of, something about Trump and his taxes that was hard to get really mad about … unsubstantiated, without documentation or ANY source. Secret stuff. The New York Times. The story, without evidence, was pushed by Democratic interests (the New York Times), and no-one questioned it, no-one censored it, no-one limited its visibility,

There’s no follow up, and often stories that define history and explain critical events are never written. Swing that bat all the way, like Twitter and Facebook, and the Senate will investigate you … for censoring stories that make Joe Biden look bad. Censoring the truth; somehow in all the personal bickering, the truth became a sideshow curiosity.

Jill Biden’s venturing out of her house to tell TV viewers this week America “doesn’t want to hear about this stuff!” Aw Jill.

@DrBiden go ahead, get in the fray, but we're not going to be nice. The world is looking to see how horrible YOUR SON behaves. We'll get the facts. Get used to it.
How's the mansion? Comfy? Great place to hide?
Would you prefer to LIE TO US?
I PITY YOU.https://t.co/VJCgEuiPx8

I’m mean, I guess. I’m just playing the CNN game, tossing the ball back. You see, Jill is married to a man running for President. The family got billions of dollars, and they got it while Biden was Vice President; before that they were not rich. The story Jill doesn’t think we want to know discusses evidence that money was obtained through selling American loyalty. Oh. Hmm! That sounds better than “The Latest Coverage of Covid,” which appears (forgot to mention) at the top of every news website … repetition, repetition, repetition.

And also that her son is a whack job who enjoys hookers, cocaine, crack, meth, pornography and has no family values, involving a 14 year-old niece in his playtime. Jill doesn’t think Americans are interested.

Ah, forget it. We can’t fight CNN, not with our tiny pens and grassroots marketing, nothing but Twitter to fetch eyeballs, and even Twitter shadow bans (very weird concept) and censors.

Even Twitter, the last vestige, the final realm of truth not being squashed like an unwelcome bug, the only place where hard hitting headlines can struggle to viewership. Youtube has been faithful, generally, not taking sides, though no-one knows what their machines do in the backroom to manage visibility of stories to the public. At least we can post and comment on Twitter and Youtube. Having comments turned OFF is just as popular today on all the big websites as the fun and popular expression we’ve learned to love, “Masks UP!” Oh Kommie, we love that! (Translation: Shut the frig up! Be nice!)

Jill says American’s don’t want to know about her silly little family. Joe says he’ll tell us his critical views after we elect him …

and look at what NPR does!

Why haven't you seen any stories from NPR about the NY Post's Hunter Biden story? Read more in this week's newsletter➡️ https://t.co/CJesPgmGvo pic.twitter.com/jAi7PnpbZf

And proud of it! See what they say, “stories that are just pure distractions!” Damn, Jill was right! I shouldn’t have been so mean!

Don’t, whatever you do, wander off the track – Google told you the news. No need to look any more. You might stumble upon hysteria, hyperbole, made up and deceptive articles! Of course! The web is full of junk! Lies! Trickery!

I mean, after all, that’s some pretty serious bad stuff. Sorry, Jill, I shouldn’t have even mentioned it. The US Senate is interested in the NY Post, because the NY Post published true crap with references, lots of quotes, photos and evidence that makes Jill and her family look really bad. That’s not nice at all.

Twitter is a battleground, full of nasty lies. Who knows what we’ll read next! Dinesh D’Souza, we all know (and I was reminded when I posted him on Facebook) (before I left Facebook for good) is ALREADY DEBUNKED. What the hell is Twitter doing allowing him to speak!

So Hunter Biden, who had an affair with the wife of his deceased brother Beau, now admits to doing naked FaceTimes and keeping sexually explicit photos of Beau’s 14 year old daughter—his niece Natalie. This is one sick family! pic.twitter.com/3GsgPBxK01

This is outrageous. If Biden wins, Jill, you can go get this guy.

As a result of all this unfair reporting, Jill Biden’s family may be made to look bad! Also, where’s the fluff on Trump? Nothing but serious news when it comes to him! And who the heck is Buzz Patterson!?!

The Hunter Biden stuff is worse than anyone could have ever predicted.

Dude’s a California Republican! Does it get WORSE than this?

He’s clearly harassing the Biden family, publicly! If it weren’t for the laws in America, he’d be in jail! Come to think of it, I would too!

Right about now, I could really use some fluff.

Fluffy, fluffy fluff about … President Trump! Harmless, happy stuff, to make him look like a regular guy! This’ll appeal to EVERYONE, especially the Bidens, who love soft, frilly articles that don’t say much and ignore the stuff everyone else is trying to unleash on our humble, soft, quiet spirits, trying to ruin our days with the most zealous, righteous, and truly outrageous facts.

This fluffy crap is historic, going back to 1963, when the most peaceful of Americans weren’t born yet. From Newsmax TV (Cable and YouTube), Attorney and author Peter David Ticktin, Donald Trump’s former roommate at New York Military Academy, and author of “What Makes Trump Tick,” goes into super-fluffy mode, saying things about the President like “He was an incredible human being … he would do things for people, help people, jump into place where he didn’t necessarily even belong, just to protect somebody … He’s a guy that a lot of people are really grateful to for those little things that he did that changed our lives! And I’m included in that!”

Now that’s the kind of fluff you won’t see on mainstream media!

The above video was shared by a Tweeter named “The Dirty Truth” (@AKA_RealDirty). It’s barely dirty. I hope someone enjoys it, though!

NYMA is an ROTC school – Trump would have gone into the military as a Sergeant. Instead he became a businessman, sidestepping military life and politics, taking advantage of the opportunities America afforded him.

Now that’s some world-changing stuff! Good to get the word out! Trump is a nice guy! Who would have thought! Stop the friggin’ presses! Hey Jill!