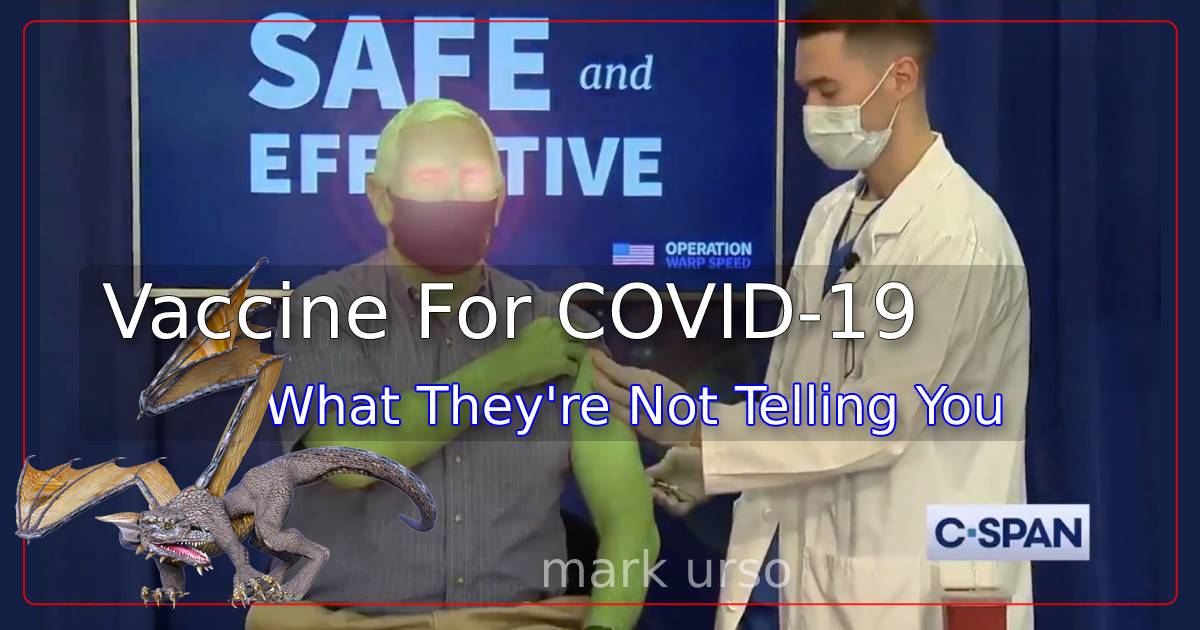 But the video is pretty great. From dr. efanzor (@drefanzor) and Dr. Elect-Daniel Ben Freeman (@DavarEchad) (possibly not real doctors).

Well, what do you want! I keep reading about how Twitter and YouTube now are not allowing talk about anything bad about vaccines. That doesn’t sound right, does it? They ain’t doctors, but they do employ mad scientists. That only means they should be excited to see if the vaccine works, or not … but apparently they’re only interested in if it works, not any issues, warnings, advisories about your health – that stuff’s nonsense to Twitter and YouTube.

Even Good Vaccines Can Be Dangerous

A vaccine might make you sick. We know that. It may not be effective. They’re generally designed to inspire your body to create its own immunity by infecting you with something. It’s not a walk in the park.

Then there’s the video below, which is real, scary, and really scary … which means mainstream media will avoid it like the plague.

The media are right in the middle of this with their collective pants down, courtesy of a void in officialness with regard to the Presidency of the United States. Antifa, BLM and even other Democrats will be filing in line to irritate Joe Biden’s backside if he is ever declared anything important; it’ll be an unprecedented shit show for four years. But right now we’re in a void, where the dumb among the devils are opening the blackness of their hearts and talking confidently and openly about things that really should be kept secret.

The media tries to lie, but with all the crazies out there, it’s hard! And numbers are discussed in strange vacuums, lacking sense. Jim Hoft, from the Gateway Pundit, says in this article some of deaths reported as COVID made a rural Colorado town a hotbed for spreading and catching this scary virus, reporting five deaths, when in reality two of them were from gunshot wounds.

Watch this – you won’t see this anywhere else other than Twitter – from Art TakingBack (@ArtValley818_):

The Video Below Has Been Censored By YouTube. It Was a Live Television Event Where A Nurse Got Covid Vaccinated Then Passed Out On TV

The nurse had just received her shot. And she passed out on live television. That’s information worth hiding from the American public!

Pretty valiant of them, to protect you from seeing it. It was just a simple video of a real thing that really happened which you should be able to see if you want. But nope, YouTube won’t let you. That’s censorship, America! In fact, YouTube has created a new category within its system for anything that mentions Covid-19, with special rules for only those videos.

Let’s try putting the same video right here on my Network Solutions-hosted blog backend. I’ve never had a video outright removed by YouTube; it completely disappeared. I submitted an appeal. Think I’ll get an answer in less than 12-hours? Nah, I don’t either. I’ll leave the broken box above for now.

Reactions To Nurse Passing Out:

Chick Norris (@chicknorrisgal): “They put out a statement saying the nurse has a condition that causes her to faint when she feels pain. How much pain was she in that she passed out within 20 minutes of getting the vaxxx? And does that mean there’s a possibility this will be painful? No thanks.”

KiTTY McFEiSTY (@PiperMarie17): “Wearing a mask mixed with nervousness and anxiety about lying or either not excited about taking the vaccine will make somebody pass out. Sure would really help her to take the fu€king mask off so the poor thing can breathe… Jesus…”

Those reactions came from Twitter. Meanwhile, an organization that wants to be your brain for you, a new group with the super-creepy name “FactCheck.org,” has come to the rescue. They explain that the video is real, but they object to it being shown because it doesn’t show how quickly she recovered. They say the video was deceptively edited. Ending a video at a part of the video FactCheck.org doesn’t agree with will make you an unethical enemy of YouTube and all the liberals who don’t use their brains.

Fact Checking Us Into Communism

This is the most outstanding example of overuse of power I’ve seen yet, in big media’s efforts to shut us the f*ck up. This is real:

“Fainting itself is generally not serious, but harm from related falls or other accidents can cause injury,” according to the CDC. “The main concern is head injury.”

The CDC recommends that those administering the COVID-19 vaccine observe patients for 15 minutes afterward to safeguard against injuries from fainting.

But none of that information is conveyed in the Facebook posts that show Dover fainting.

Instead, those posts include captions that falsely suggest there’s something unsafe about the vaccine.

“CCU Manager passes out mid-live broadcast after receiving the COVE idD Vackseen,” was the caption accompanying a version of the clip that racked up hundreds of thousands of views in less than 24 hours on a page that frequently posts anti-vaccine messages.

Another account that has a history of anti-vaccine messages said: “Watch this nurse pass out after receiving the COVID vaccine. It’s so safe though, right? Why do people continue to follow these rabid dictators?”

The captions they are mentioning are great example of Freedom of Speech. The concept involves readers using their own brains.

COVID is a Political Virus

There’s some tough resistance, like in a Communist country, to anyone saying anything bad about vaccines. Nevertheless, a group called America’s Frontline Doctors have had enough, and have developed an important resource, a website which has a variety of opinions on the subject.

In this article, “America’s Frontline Doctors Urge Opposition to Experimental Vaccine Mandates, Prescribe Caution, More Transparency,” they provide refreshingly real information. It’s LONG overdue. Among other sensible claims, they say “A doctor should be allowed to use his or her own judgment in consultation with the patient. Opt-out policies, including no mandates from any private or public sources, must be continued with the experimental vaccine, just as they have with previous fully licensed inoculations.”

Really, the issue may be broader than social media. It’s worldwide, and the implications for society are huge. Do you think a petition would help, to “prevent people from being intimidated or pressured into taking experimental vaccines?” Here’s one! And read this white paper! It includes priceless information, like from Dr. Richard Urso, an ophthalmologist talking about HCQ, a cure that’s been available since day one (no relation; he was speaking during an interview with Laura Ingraham): “I have had several thousand patient visits to specifically discuss the toxicity of this drug over my last 30 years. It’s a super safe drug. It’s safer than Tylenol, aspirin, Motrin.”

These doctors are going against the tide of evil! Wow! They write “It is self-evident that HCQ is safe from the fact that it has been FDA approved for 65 years and has been used many billions of times all over the world and it is over the counter in most of the world”

And finally, this gem from Kirstie.
Have a wonderful day, and keep smiling!

Mainstream media and the left are hiding something, while pretending to give us an extremely invasive, never-tested vaccine that’s good for us. Someone passed out on live television, and that video will be stored in hiding, like a deep, dark secret.

The question is … why?

Stay safe and healthy everyone!

One Reply to “COVID Scare! Mike Pence Has Reaction to Vaccine Live On Video”