Can Your Mom Drive?

We don’t know exactly what time yet, but we need a ride.

This post came across Twitter from user Russian BOT (@AqmagaB), who also has the hashtag #secessionNOW on his profile! I didn’t say the Russians wouldn’t be involved! They may also need a ride. 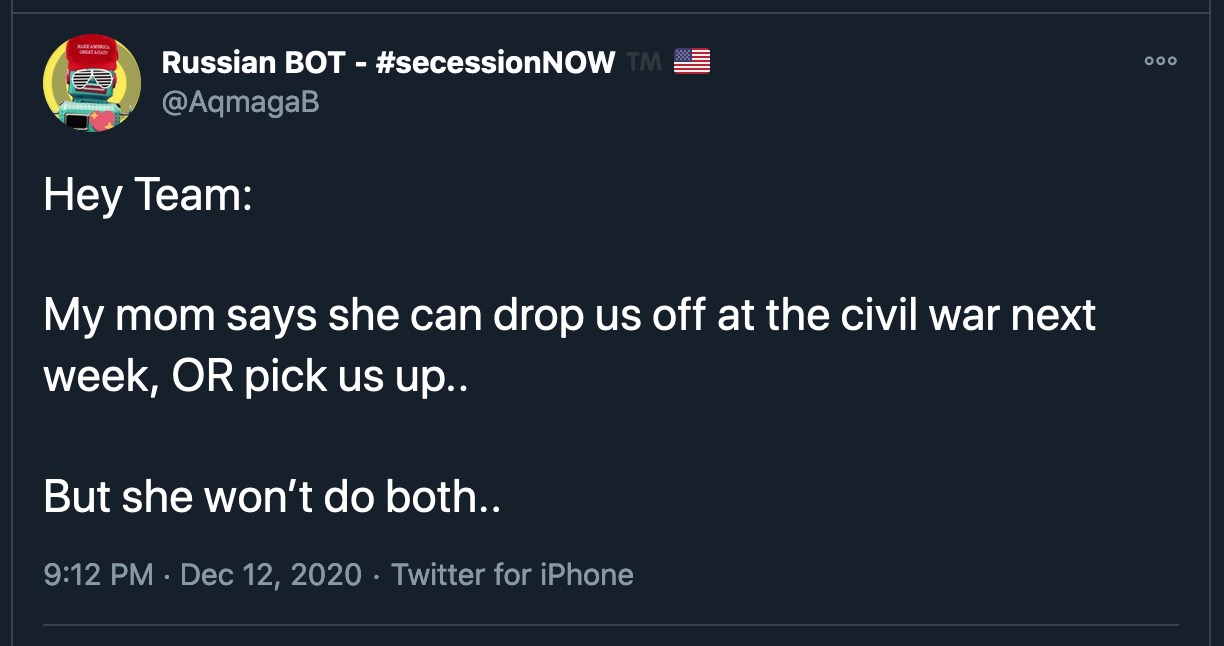 So … as we’re stuck in a patriotic timeout, watching punches fly in Washington as a sort of warm-up … we’re forced to wonder, what’s it a warm-up to?

Katie Daviscourt (@KatieDaviscourt) tells us in one town in Washington state, it might be a warm-up to warm, delicious beverages and meals, normal-style … that would be great!

HAPPENING NOW: THIS IS AMAZING! ??

The entire town of Mossyrock, WA is out rallying after the Mayor of Mossyrock announced he will not be abiding by @GovInslee’s COVID lockdown orders. pic.twitter.com/oRkmp6HFwZ

Then there’s the not-so-great … For example, I agree with Mrs.Deplorable (@mojoraerae), who called a video of Chinese laughing about how easy it will be to take over the US “beyond disturbing.”

This is both amazing and disturbing. It confirms any suspicions anyone may have had about Biden dealing with China and giving away US loyalty. The whole crowd laughs when he tells them we couldn't control Trump, but now Biden's in power. It's joke, but it's not a joke. ???? https://t.co/VxSvNGN5lF

There’s been real tussling in the streets of DC, but no big stories have erupted. Nerves are at an all time high as we wait for a seemingly-neverending pendulum, time-passing waiting for justice … the calm before the storm … but then again, maybe the storm will fizzle out! After all, the rowdiness has all been instigated by non-expert, rough-edged, young, adventurous but clearly not battle-ready skinny urban revolutionaries who would be better-matched to a good game of chess or maybe picking a flavor at Starbucks.

Imagine becoming a famous radical, tortured and threatened, for running a cafe. A cafe that serves food and drink during the calm …

DC: Antifa and BLM are harassing every @realDonaldTrump that walks in front of the White House

Is this the kind of country we want to live in?

Where American citizens can’t walk through their nation’s capital without threats of violence?

Meanwhile, President Trump took a helicopter ride today over Washington, DC, to view the rally in his support. Businessman Mike Lindell was there:

He said that attorney Sidney Powell told him all of her lawsuits on election fraud in four states are now with the Supreme Court. –
Mike Lindell: ‘This Is the Start of the Greatest Revival in History’ https://t.co/o9xXq9ogB9 via @epochtimes

The storm could cleanly be averted, maybe (depends on if mom can drive) if Sidney Powell gets her way … and Newstarget tells us “appearing on a recent segment of “Sunday Morning Futures” with Maria Bartiromo, Director of National Intelligence (DNI) John Ratcliffe made the suggestion that Joe Biden could end up losing the election.” Lindell told the crowd at today’s rally Powell’s team “turned in all of their lawsuits to the Supreme Court last night, the four states, and now all the fraud will be revealed.”

America KNOWS Donald Trump won the 2020 Presidential election by a hugely embarrassing landslide over a lame dimwit nobody supported and who didn't campaign … Oh, and the fat lady is NOWHERE IN SIGHT. @MAGA ?? pic.twitter.com/SpL21CWHAy

Will the truth keep masquerading as fiction? Will the world stop turning the way we expect it to? Americans won’t feel right in a fully-corrupt society, I think. We’re used to corruption keeping check behind closed doors, and we’ve already begun to reject made-up science, fake numbers and leaders who blatantly, openly and proudly lie. They may try to rustle up some incentives for Americans to take a vaccine that miraculously developed in record time, but many Americans will keep waiting for a cure for the common cold, or cancer.

If you have to bribe people to take a “life-saving” vaccine, then something has gone terribly wrong.

Some Say Civil War is At Hand

The newly-formed “We The People Convention” is poised and ready for battle, putting forth an “invitation” to the big event, wherever, whenever it may be, with the message to President Trump “We the people will support a national re-vote. We will also have no choice but to take matters into our own hands, and defend our rights on our own, if you do not act within your powers to defend us.” 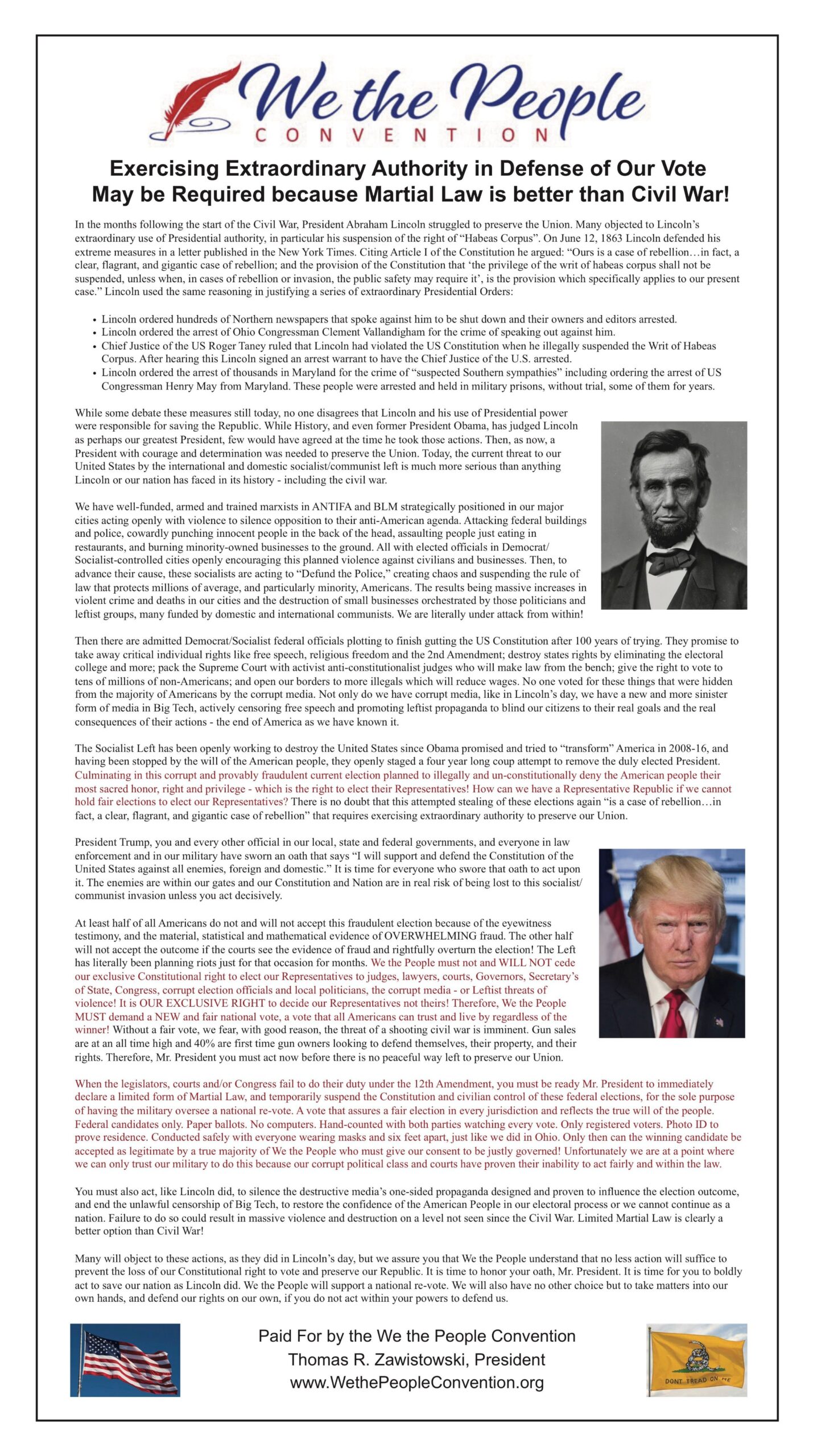 During the fray, there’s no need to worry about Biden, who is apparently safe and sound, still hiding, but happily, in his basement:

Welcome to the weekend that will go down in history as the gateway to the future of human society. Or maybe the “resistance” will just stay home and do its homework, and the Kraken will show up after all!

2 Replies to “Can Your Mom Drive Us To The Civil War?”