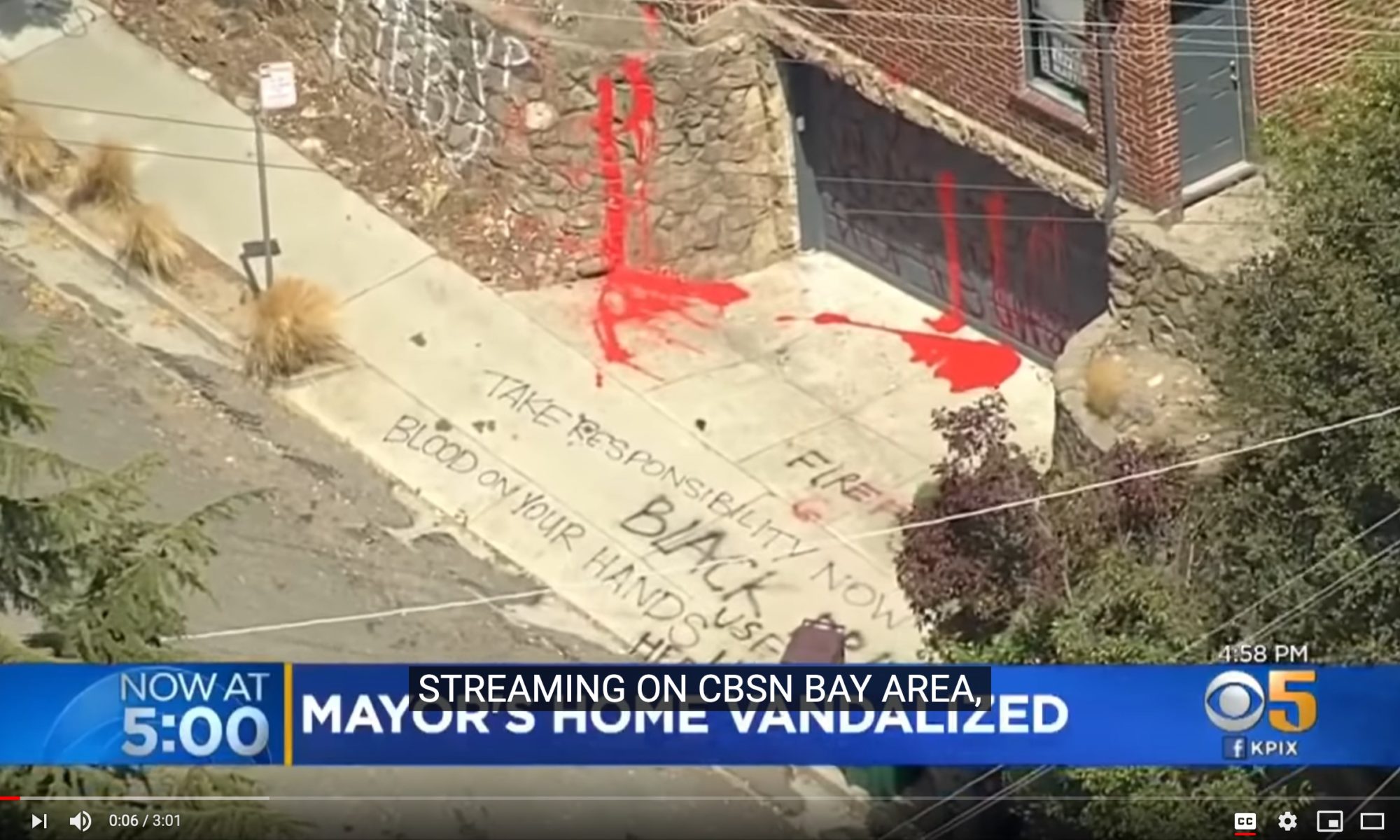 Social media is the wild west. I posted a story about the Mayor of Oakland, and only confused people.

I wrote the following as a follow-up.

If you read the article, it should be clear, without me explaining more, that the Mayor’s statement that the activists were “terrorists” is astonishingly hypocritical. But for those of you who jump to conclusions and are quick to insult, with no other apparent purpose, I’d like to suggest it’s your responsibility not only to think protesting is awesome, not only to teach others how to protest peacefully, and not only to practice peaceful protesting if you can, but it’s also your responsibility, when involved in such a thing, to sometimes explain what you’re protesting about.

Many people get involved without really knowing what it is, more than the general spirit or the “title” of the event. They all mean well. But in this case, with current events, it’s easy to lose sight of what the good message is. BLM isn’t out doing any other peripheral good deeds, appearing on talk shows, they barely have any leadership with any voice, and they have done a poor job of distilling their “good” message while it’s obviously being dragged through the mud, intentionally, by some people who have a big influence. Imagine someone only ever seeing the bad protests, the ones where there’s violence and fire, on TV, but not having a chance to attend a protest and see the good part. The good part is barely ever shown, so this is possible. If you think of this, you might stop before insulting people for not being sympathetic to your message. There are many layers of interesting things happening all at once, some quick and impactful, some slow and anticipatory, all different kinds of ways to look at the current events (and report on them, and share about them). Please be assured, if you read someone’s commentary and it’s critical of current events or political people, you probably don’t need to jump into a defensive posture; the person is probably NOT criticizing peaceful protesting.

Why on earth would someone need to say what I just said? That you don’t have to jump to the defensive; it’s probably NOT a regular old person suddenly turned anti peace? Well, whether designed or not, there’s a massive jumble of events all being yelled at us by every major news operation, while news reporters have strong opinions which are not needed to report facts, and it’s hard to tell what’s real news or what’s opinion (Twitter was the big disrupter of normal information delivery). Let’s not yell at each other amid the chaos.

Let me hold your hand, if you need to take a breath and take that in. For many people, everything I just said will sound like normal old fashioned common sense. But some of you, probably, are just catching your breath, just looking, looking constantly, for the little slight, the opening, the place where I insulted you, and the opportunity to get me back. That can be distracting, when, first of all, you’re not going to get it from me, and second, when the rest of us are busy consuming interesting information (in the first pass, sans judgement).

Let me explain. The Mayor of Oakland considers herself virtuous. She probably is, in some ways. But she has ignored the damage done, while trying to let everyone live freely and have basically whatever they want. It’s a classic problem in any society; someone has to pay; everything can’t be free. I suppose they mean well, the leaders of these kinds of cities, but they have their heads stuck in the sand. They are thinking “we’re doing great things for the world,” and if I were only a philosopher, I might agree. But even if I were a very generous philosopher, I’d take issue if I actually saw some of the “neighborhoods” and damage being done to the cities. It’s as if something needs to be done, it’s just going to get worse, and it’s really obvious lazy people are just becoming homeless people; the homeless population should be interviewed and these great freedoms (to rob stores, defecate in public and trespass) only be granted to those who are actually homeless. But that’s a fine line. So maybe we should make it less fine, by breaching it, and reaching out to these homeless people and trying to get them jobs. And before you jump in (holding your breath), I know there are efforts to get homeless people jobs, but if you blindly give everyone something for free, you’ll run out of things. I’m not writing the book, that’s just common sense.

So this Mayor tells the President of the United States to basically go to hell one day. Instead of a normal, professional reply, she tosses a completely unjustified racist insult at the President when he suggests he could help by sending in some troops. Now I don’t know what exactly is meant by “troops,” but I didn’t think it was too bad an idea, as there was a lot of damage, and federal property was being targeted. It made enough sense. It was met with a very snarky remark.

That night, some protesters, as they widen their territory throughout Oakland, made it to the Mayor’s neighborhood. The news tells us some people spray painted on her wall and driveway.

Months ago, this exact scenario was in any clear-thinking follower-of-the-events person’s head; what happens when they set up camp or do damage at the Mayor’s house?

It’s once again at a point where I look like a bad guy. I did not write the story. I need to share it with someone, or at least create a memo of what happened. It’s a much more interesting story than Steve stubbed his toe, which apparently is a great photo to show your friends. So please, either block me, or give me the benefit of the doubt. I have not suddenly changed into a different person than you know.

So, here’s my take. This might be called “vandalism” (at the Mayor of Oakland‘s house). The photo showed what looked like an entry gate and driveway, both spray painted by vandals.

The night before, President Donald Trump was a racist. That is a QUOTE from the mayor. I didn’t say it. It’s a quote. The Mayor of Oakland called him a racist. That’s how she gets things done.

The NEXT DAY, the Mayor of Oakland called the vandals TERRORISTS.

She skipped vandals. She skipped rioters. She went right to TERRORISTS.

Because they did some vandalism on her property. No-one was hurt, and hopefully there were a huge majority of peaceful protesters and it was a great event. At this point, I DO understand if someone has a hard time wrapping their head around all of this. And if I said something about it, and you just overheard that I thought this was “funny,” which it is, you could think I’m being nasty. That’s the NICEST thing I could say about it – I said from a news reporter’s perspective, this story is fun. If you were quick to judge and not fond of actual tolerance, you could insult me, not having put all the information together in your head. But the insult’s already bounced off me.

On which note, I’ll quit. But I won’t apologize. Not about this, anyway.

I’d recommend, if you’re a protester, to know what you’re protesting about, and that it matters what it looks like.

Assuming you do know what the message is, then make sure everyone else does. What I mean is the people who see you protest; that’s why you’re out there, to be seen. Pay attention if the appearance of what you’re doing is smeared, on the fly, in the field, so no-one can intervene. Call for a meeting to do two things; explain to the press that the bad guys do not represent you, and discuss how to stop the problem from happening again. I feel as if a 12 year-old would appreciate this simple strategy. But everyone is just a passive “attendee,” collecting goody two shoes points for attending, looking great waving flags and banners, then sometimes insulting their friends on Facebook when someone comments on bottles being thrown at police.

When the shit hits the fan, you can reaffirm how important your mission must be, but it’s also a good time to make sure the MESSAGE has not been completely lost. Your good doing never seen, appreciated, but just swallowed by noise. No-one is accountable, and I won’t apologize for telling you I no longer know what your message is.

Here’s another thing to ask your nearest 12 year-old: How long should a good protest last? I’d be surprised if he answered “Oh those, they go on for months, every single night!” And if you asked him what time they start, I doubt he’d say “Normally a protest should start way after dark, and really get going after midnight.”

I’d also strongly recommend never commenting on touchy public discussions when you don’t have anything to add to the discussion, especially when all you have is an insult for the original poster. That’s the opposite of both tolerance and freedom of speech.

Please don’t be insulted if I don’t understand exactly what your role is.

Even if you’re a vandal, I promise I won’t think you’re a terrorist.