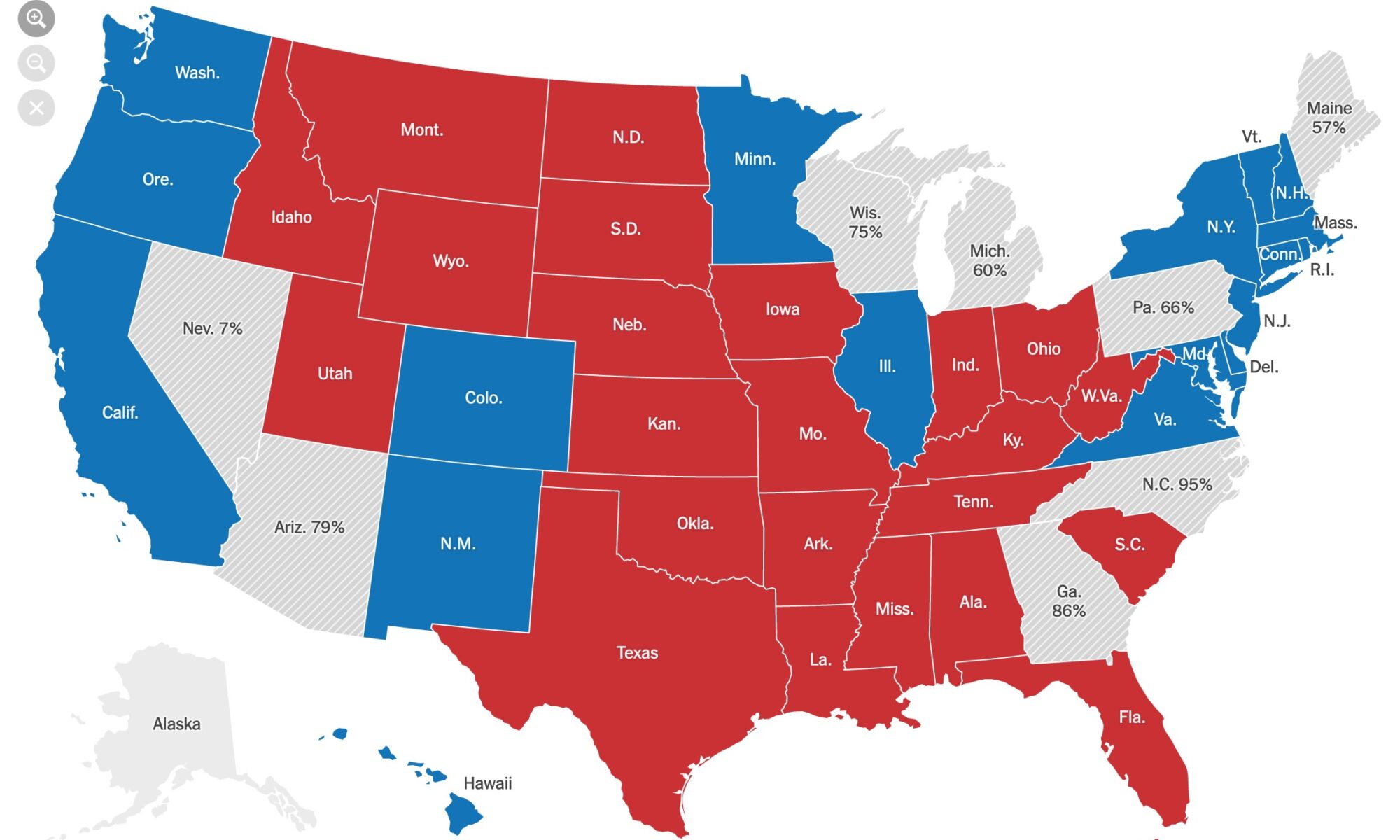 The numbers fumbling has begun. It’s 1:20 AM, and I’ll give you a wrap-up of Election Day 2020. We don’t have a winner yet at this point, but Donald Trump did extremely well. That’s not accounting for anything at all suspicious happening. If it were discovered voter fraud took place, then Trump did miraculously well, against unfair tactics, blinded already by the media.

The President has won enough states at this point to see he’s very likely the winner of this US Presidential election. I can’t imagine planets rearranging themselves enough to make a difference, as we see Florida and Texas giving Trump’s campaign huge strides; as I type this, NBC just called Texas, 38-more electoral votes for Donald Trump! 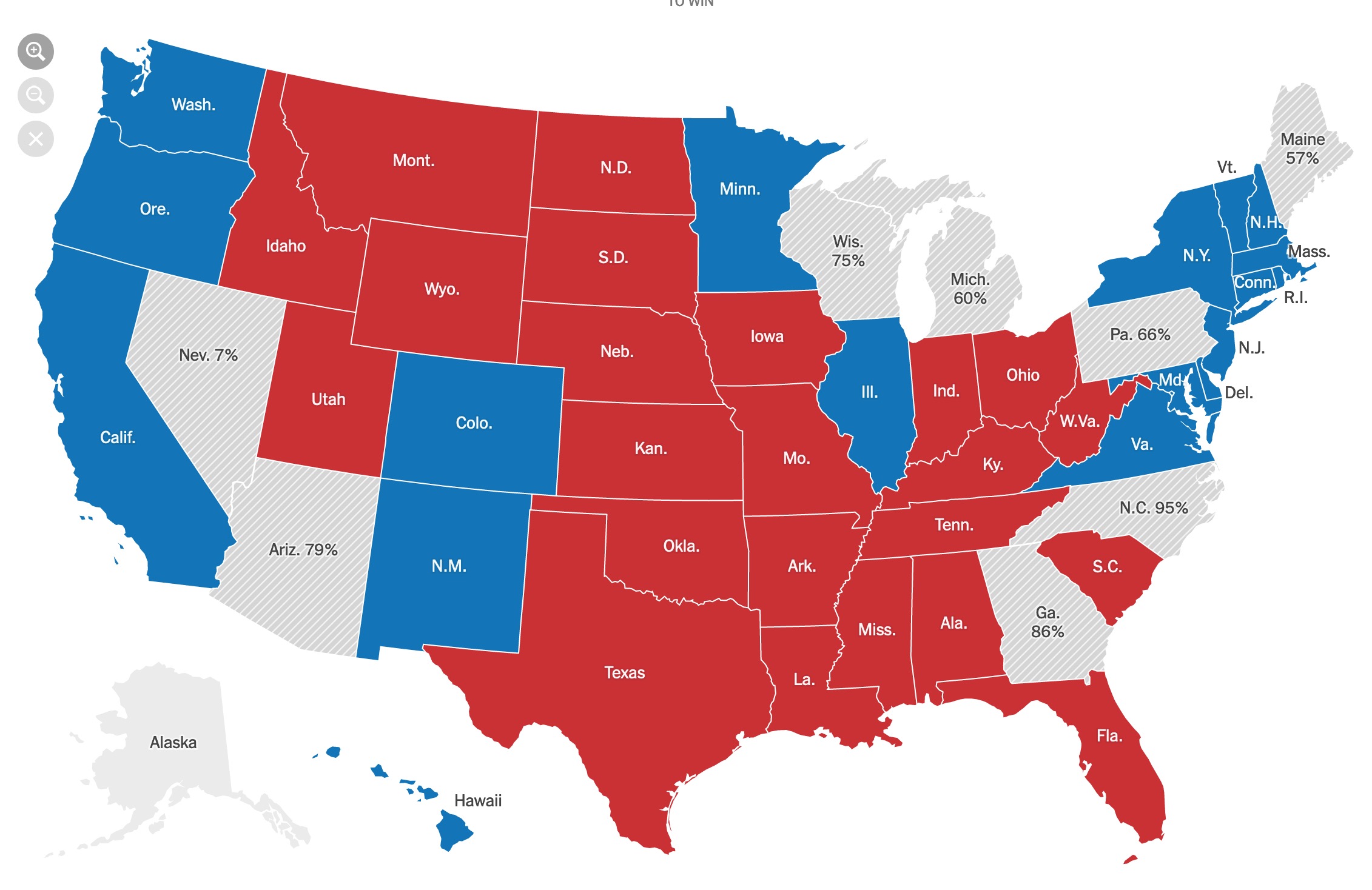 President Trump is inches away from being indisputably re-elected. Despite this, and despite the apparent cooperation of most arms of freedom (the media, the handlers of information, the handlers of ballots), there will be issues, and those issues should be expected to be pointed directly at pausing the final result. But they can’t topple it, so we can breathe again.

It’s my opinion there’s no way Joe Biden can recover, however if he plays true to form, we’ll see chants of unfairness and made-up reasons to be emotional. 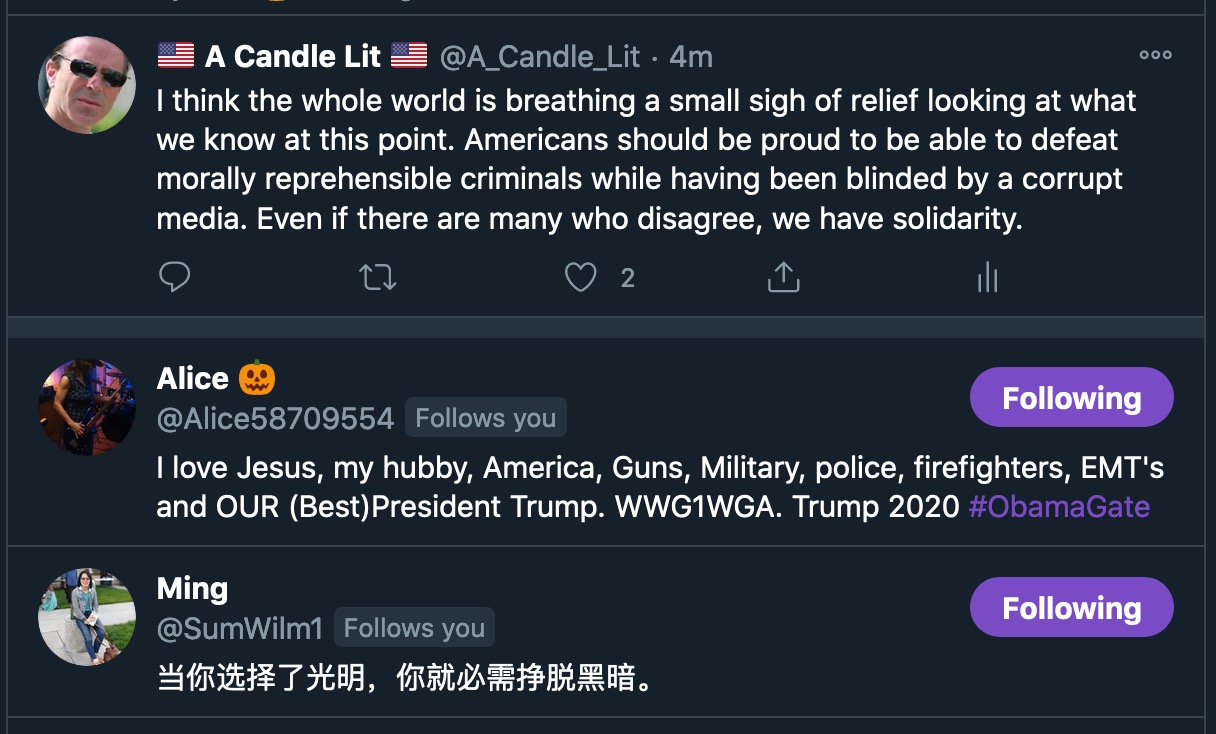 In Pennsylvania, a key state for getting to the “win” with electoral votes, the state’s Attorney General tweeted earlier today, in the middle of a national election, that it’s unquestionably Biden’s win, which is a big political no-no. The state started strongly blue out of the gates, but as more in-person votes were counted, Trump surprisingly took a substantial lead. Pennsylvania is considered by skeptics of fair reporting as a likely place for fraudulent activity, and Twitter today featured several videos of poll watchers not being allowed to watch polls in the state, poll locations where Biden signs were posted right against the entry door (illegally) and, even better, a big black guy handing out pamphlets showing voters exactly who to vote for (Biden was the only one shown on the flyer, in big red letters), right inside a polling place, face to face with each voter as they stood in a line …

So there’s that. Do you think Pennsylvania officials, known to be Trump-haters (a new self-identity being made into a board game, bobble heads and blow-up dolls) were surprised when their corrupt little state went big red?

Maybe that’s why they stopped counting ballots early in the evening. They just stopped. Blamed a water main break or something.

Done for the day! 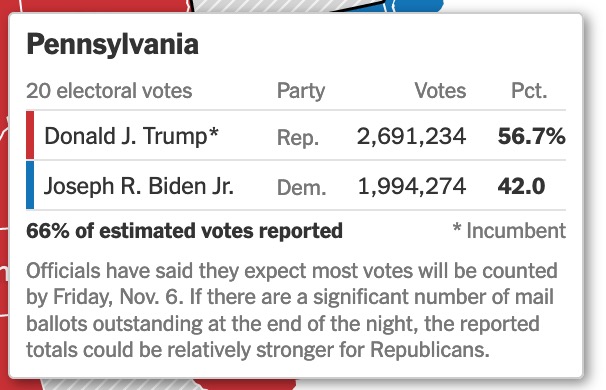 By the end of the night it’s 224 to 213 in favor of Biden, according to a live election map provided so generously by the fine criminals at the New York Times, a newspaper that poses as cool and virtuous. Credit where credit is due, they did toss a LOT of red paint around (image of US above), and finally admitted Trump won Texas (a LOT of visual red color going on there) … but they’re still not going to fill in the blanks. If they populated their simple X vs Y equation with electoral vote quantities from just one more state, North Carolina, which is 95% counted … Trump would be shown winning! 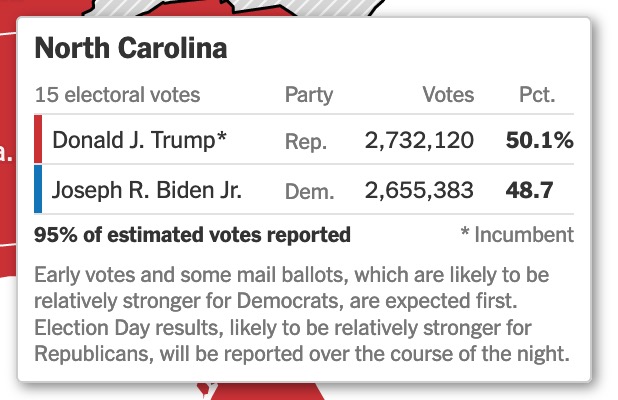 Trump is also showing strong, in many cases winning right now, in Georgia, Pennsylvania, Michigan and Nevada. In Arizona, a Republican governed state, Fox news actually RETRACTED its call for Biden as winner. There are still approximately two million votes not yet counted, many of which are in-person votes, which could very easily turn Arizona red for Trump. That’s exactly what I expect to happen tomorrow (Wednesday, the “day after”).

These “calls,” and the red and blue states on the map, are put forth by news operations like the NY Times (which I watched, which seemed to be based on what NBC News reported), Fox and others, which “call” winners as numbers start to come in. They can be wrong.

My bet is, freedom, love, compassion and lots of fresh air (directly inhaled without masks) are in the future for America. Our friends all around the world are watching us right now, and we should be proud.

4 Replies to “A Vision of Solidarity, As Americans Choose a President”